The Governor's rise may in part be due to his vocal response to a 60 Minutes episode.

This week, for the first time, Gov. Ron DeSantis jumped ahead of Donald Trump in trades forecasting the winner of the 2024 Republican presidential nomination.

DeSantis took the lead Wednesday on the prediction market PredictIt, at a $0.24 yes price to Trump’s $0.23. The Governor held his lead until Friday, when the two tied at $0.22.

The Florida Governor and ardent Trump-ally has been trailing the former President for the past month. Near the end of March, DeSantis closed in on Trump. The Governor started March at a $0.16 yes price to Trump’s $0.25, and ended at $0.19 to Trump’s $0.24. 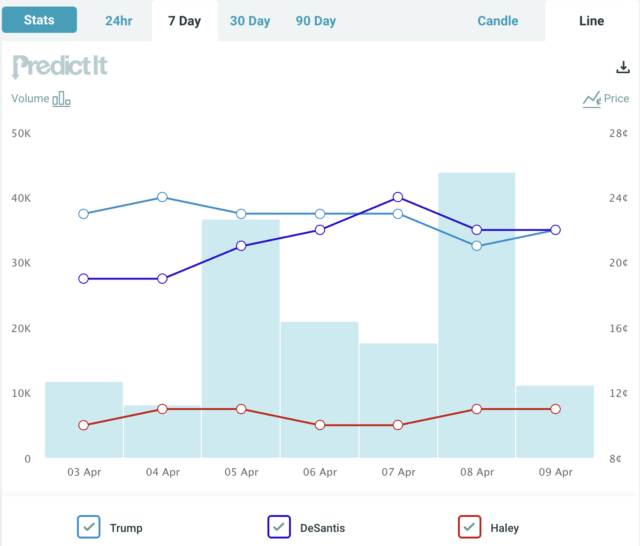 The rise of the Governor in the forecast market this past week may in part be due to his vocal response to a 60 Minutes episode that investigated allegations of vaccine favoritism.

DeSantis’ ascendance comes as Trump has struggled to maintain visibility amid a social media blackout, but it should not surprise those who have been tracking the enthusiasm of activists for the Governor in recent months.

Florida Gov. @RonDeSantisFL just vaulted to the No. 1 spot, ahead of former President Donald Trump, in Predictit online futures market for Republican 2024 nomination. DeSantis at 23 cents a share, Trump at 22 cents. @NikkiHaley 11 cents and @govkristinoem at 10 cents @PredictIt pic.twitter.com/ejL8rbjD7c

Other Florida names are even more unlikely, according to forecasters.

DeSantis is also finding success in the prediction market for the upcoming gubernatorial election.