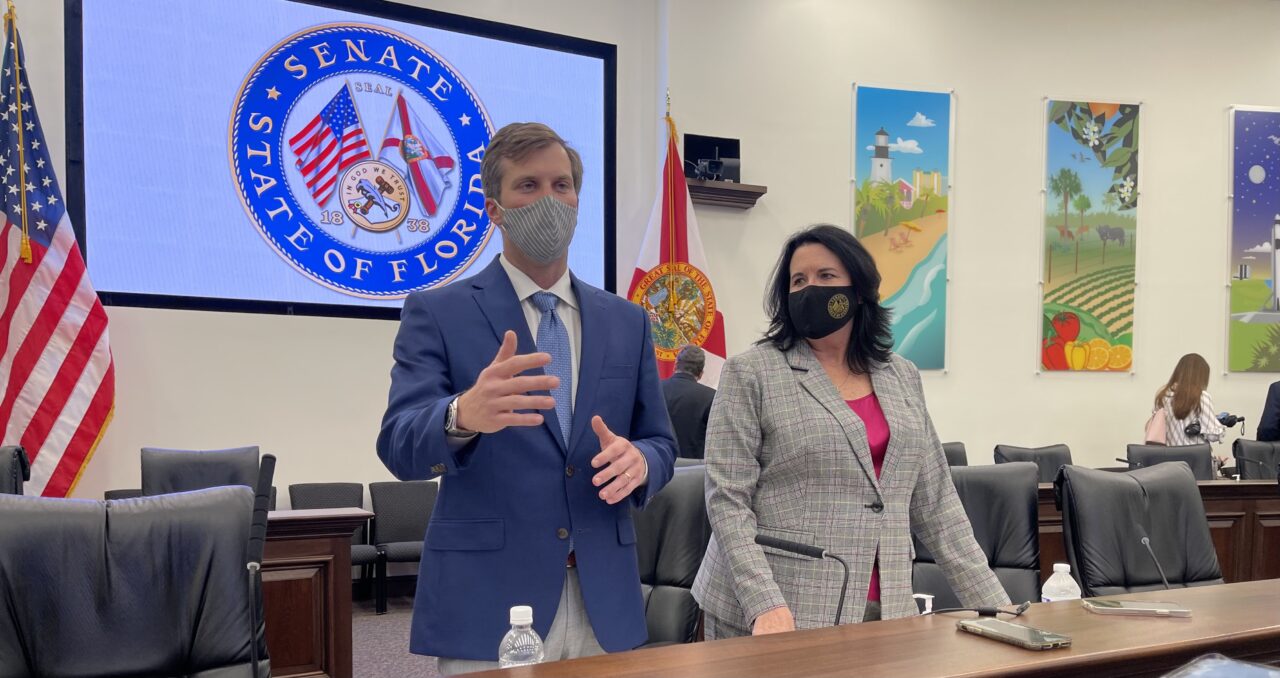 Lawmakers have readied the state’s budget for the coming fiscal year for a quick vote on the final day of the Legislative Session.

The House and Senate on Thursday discussed their $101.5 billion budget plan (SB 2500), finalized Tuesday afternoon. The Legislature must wait 72 hours before passing the budget and sending it to Gov. Ron DeSantis, meaning lawmakers can vote on it beginning at 12:06 p.m. Friday.

Senate President Wilton Simpson expects his chamber to leave early on Friday, the 60th and final day of Session.

Sen. Kelli Stargel and Rep. Jay Trumbull, chairs of their respective chambers’ appropriations committees, served as lead negotiators in budget talks. Those discussions have been underway for the entirety of Session.

“That increase is largely attributed to COVID-related impacts,” Stargel said across the fourth-floor rotunda, in the Senate.

Among them is a $4.3 billion increase to account for an additional 1 million Medicaid enrollees and $2.8 billion in federal stimulus for child care.

Nearly $7 billion in federal aid bolstered the Legislature’s budget. That money, from an anticipated $10.2 billion pot for Florida through the American Rescue Plan, is funding Florida is expected to receive because of the COVID-19 pandemic.

However, not all of that funding applies to the coming fiscal year, and the American Rescue Plan tally isn’t fully included in the the top line $101.5 billion.

This year, DeSantis proposed a $96.6 billion budget before the federal government rolled out the latest stimulus plan. He has since peppered lawmakers with suggestions, including $1,000 bonus checks for teachers, principals and first responders, which made it into lawmaker’s spending plan.

The Legislature’s budget ultimately keeps $6 billion in reserves. From that $350 million is slated for the budget stabilization fund from the American Rescue Plan.

“Through a combination of key investments and significant reserves, this budget sets Florida on a responsible path towards a full economic recovery that will leave our state well-prepared to address potential future challenges and seize upcoming opportunities and more and more people locate here to our great state,” Stargel said.

On top of the $10.2 billion Florida is receiving directly from the federal plan, schools are to receive $7 billion. At the behest of House PreK-12 education budget negotiator Randy Fine, the state will be appropriating that money.

However, the federal government intended to make those funds available directly to state education agencies. Fine’s position during this month’s budget conference delayed negotiators’ agreements, which Fine’s Senate counterpart called a “monkey wrench” in the process.

“Because we can,” Fine replied.

“I know you did not just do that. That’s not the correct answer,” Valdés shot back.

At times, the budget looked like it may not arrive on time despite legislative leaders’ insistence that it would. Because the federal funds aren’t in the states’ hands yet, lawmakers saved details on those plans until the late stages of the budget-making process.

The majority of the federal stimulus will go toward infrastructure and environmental projects.

Among that is $2 billion for the State Transportation Trust Fund and $300 million for Department of Environmental Protection land acquisitions.

“The House budget shows our member’s commitment to our environment, our families and our communities,” Trumbull said. “This balanced budget reflects our belief that the state should not spend more than it takes in, and makes strategic investments in Florida’s future.”

The final budget won’t be the full $101.5 billion after DeSantis issues his vetoes, but it will likely top $100 billion for the first time in state history. DeSantis made just over $1 billion in line-item vetoes, a historic amount, last year as Florida braced for the economic fallout from the pandemic.

The Legislature waited nearly three months last year to send the Governor the budget to buy him time to assess the pandemic’s impacts. Ultimately, he signed it two days before the fiscal year began.

Stargel told reporters this month that a $100 billion budget won’t be sustainable for future legislatures, which won’t have the cache of federal aid.

Other top items in the budget include $43 million to raise the minimum wage for the state’s nearly 13,000 employees to $13 an hour, a priority of the Senate President. House Speaker Chris Sprowls got $156.4 million for workforce measures and to update the state’s unemployment system portal.

Among DeSantis’ top priorities was an additional $50 million to continue raising teacher salaries to a base minimum salary of $47,500 annually. Lawmakers wrote that additional allocation into their budget after beginning with a $500 million expenditure last year.

In debate, senators were thankful for the additional funds that became available to Florida, through economic recover and the American Rescue Plan, signed by U.S. President Joe Biden.

“We thought we were going to be really scrapping the bottom, and thanks to recovery in our economy, and really thanks to some decisions that were made in Washington and by our President, we are in a very different position,” said Sen. Loranne Ausley, a Tallahassee Democrat.

Bradenton Republican Sen. Jim Boyd said he and others had been managing expectations before the state’s financial situation turned rosier. He won a $100 million appropriation from the federal stimulus to mitigate the environmental damage at Piney Point.

But unlike Ausley, Boyd directed his thanks to the Senate President and colleagues rather than Biden.

“We all have stepped up in a way that I just can’t even imagine,” he said. “You’re changing the lives of Floridians, not just in my community and district but across the state.”