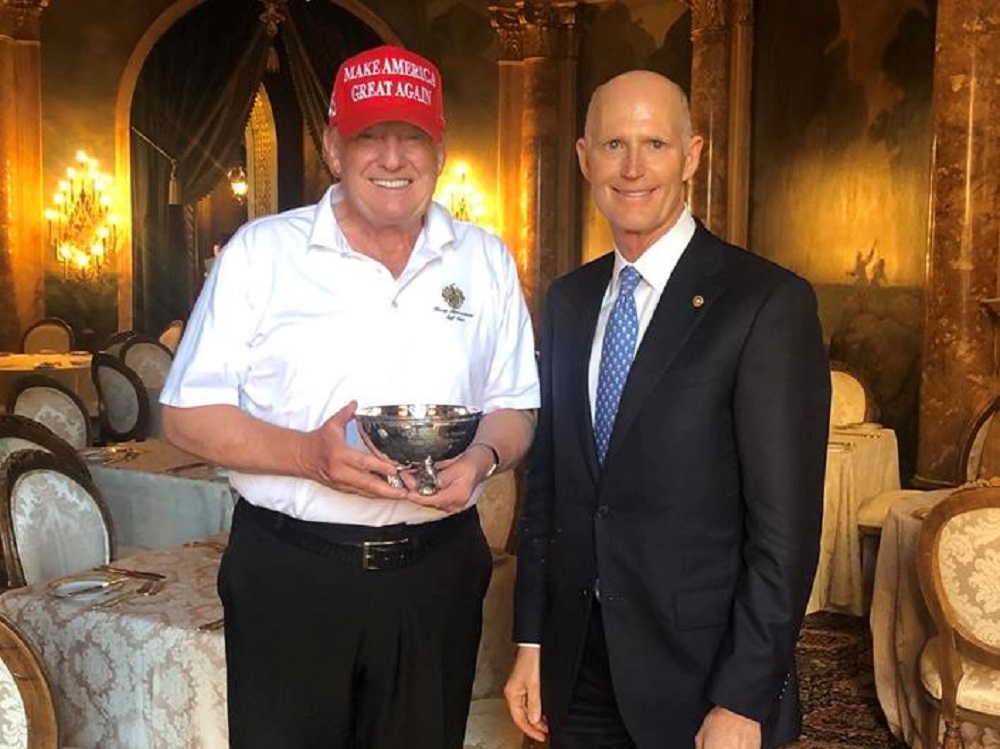 Will a scorned ex-President play in Senate primaries? Scott hopes not.

“What I’ve suggested to him is to let the citizens of that state pick their primary winner,” Scott said. “And then help those that win that he believes in.”

“And so, but, you know, he believes in things that I believe in,” Scott said, returning to talking points about a “secure border” and so on.

Trump has moved his political operations from the sultry climes of South Florida to Bedminster, New Jersey, where he prefers to summer.

But whether Trump is next door or 1,000 miles away, Scott functions as if the heat is still on regardless, with the former President at odds with many establishment lions of the Senate.

Just last month, Scott in his capacity as head of the National Republican Senatorial Committee, invented an award for Trump, the NRSC Champion for Freedom Award.

“President Trump is a proven champion for all Americans,” Scott said at the time.

Not quite all Americans, as it turned out. One day after being given the award, Trump called Senate Minority Leader Mitch McConnell a “dumb son of a b**ch” during a speech.

This left Scott with nothing to do but clean up. He went on ABC “This Week” and defended giving Trump the award. But there too he explained his dilemma of trying to keep Trump in line.

Scott also said then he advised Trump to stay out of open primaries and not work against incumbents like Sen. John Thune of South Dakota.

“What I have asked is, I would like him in open primaries not to be involved,” Scott said, noting his own “very tough primary in 2010” as a reason the Senator has “elected to stay out of primaries.”

“When I give advice to somebody, I don’t necessarily expect them to take it,” Scott allowed.

Trump likely will play in Senate races, including those in Alaska and South Dakota where incumbent Republicans riled him.

But in Florida, Trump is on board with a third term for Sen. Marco Rubio, the incumbent on the ballot next year. The endorsement came in April through Trump’s Save America PAC, his post-presidency political action committee.

“It is my honor to give U.S. Senator Marco Rubio my Complete and Total Endorsement,” Trump declared in a statement issued by the PAC.