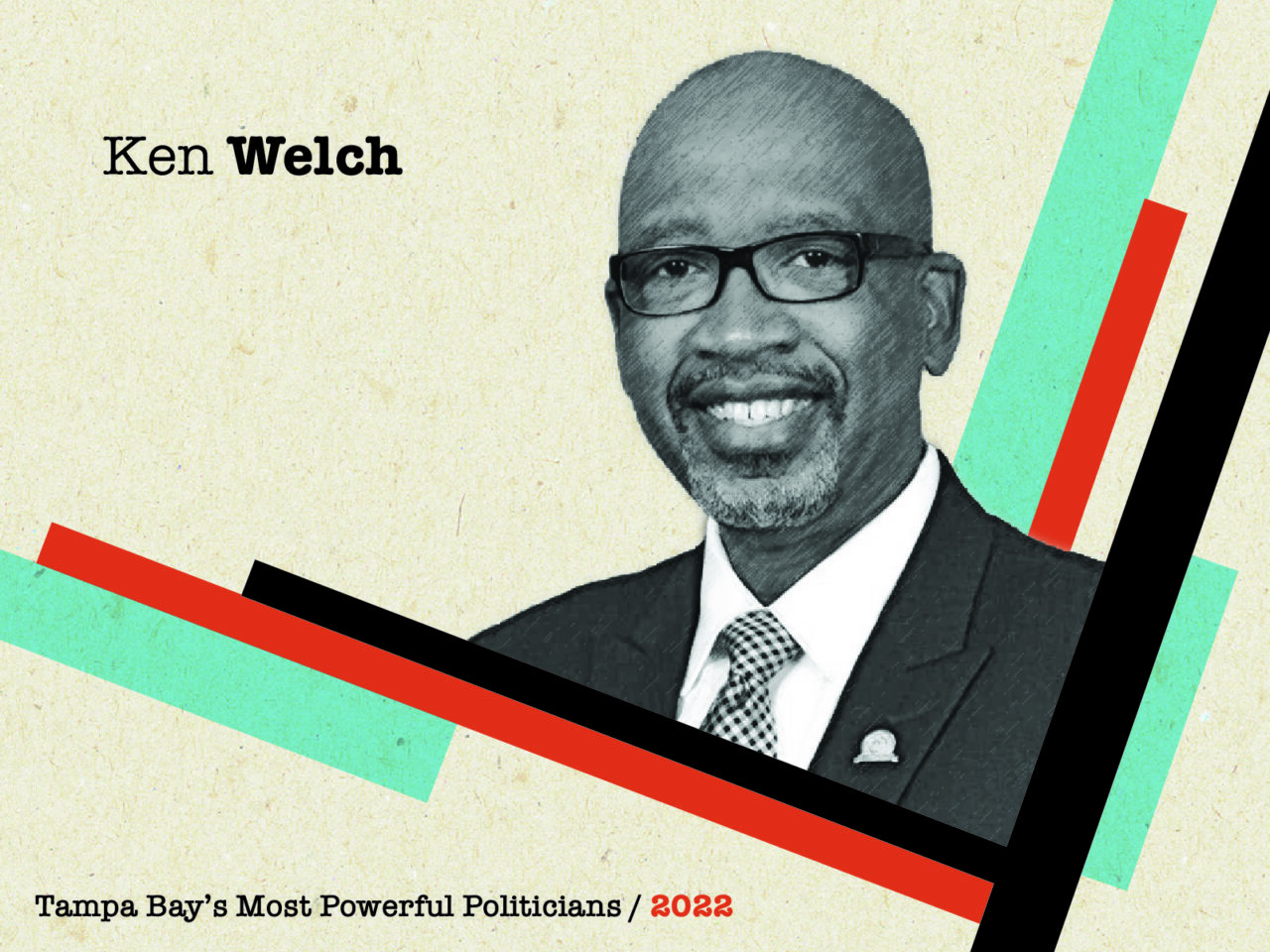 Welch brings analytical prowess and an understanding of lived experience as a multigenerational son of South St. Pete.

Ken Welch is the accountant.

No, not like the 2016 Ben Affleck action film. Welch, an accountant by trade, was recently sworn in as the first Black Mayor in St. Petersburg history. His election launched him from the bottom five of last year’s list to the top five this year.

“Principled, thoughtful and dedicated. All words I’d use to describe Mayor Welch. An accountant by trade, Welch will do deep dives and he wants to fully understand the policies and items he considers as an elected official,” said Preston Rudie, founder of Catalyst Communications.

“He truly cares about the community, and he listens. While mostly a consensus builder, don’t be fooled. Welch is someone with a vision who is not afraid to take risks and do what he thinks is right. Over the next few years, I believe Welch’s influence on the region will grow as he settles in as St. Petersburg’s Mayor, and the residents of St. Pete will be better off because of it.”

The St. Petersburg native might “love the smell of spreadsheets in the morning” but he isn’t just a numbers guy. He’s got some deeply rooted St. Pete history. Welch grew up on the city’s historically Black Southside. His ascendance to the Mayor’s office isn’t just historic. It’s poetic. His father, David Welch, was only the second Black Council member in the city’s history and 30 years ago ran for the office his son now holds. David Welch died in 2013.

Before being elected Mayor, the 57-year-old Welch was a longtime Pinellas County Commissioner, even serving as the Commission’s Chair three times. He was elected to his first four-year term in 2000 and re-elected in 2004, 2008, 2012 and 2016.

He also lived through the end of segregation in the city. And following a racial disparity study that found St. Pete was built in part on laws that kept Black residents from having the same opportunities as White residents, Welch pledged to imbue equity in all aspects of his administration.

“Deep community roots and decades of experience serving on the Pinellas County Commission — including his work on critical issues like transportation, housing and economic development — make him uniquely suited to leading the Sunshine City,” RSA Consulting President Ron Pierce said. “Through his extensive knowledge of these issues and his unifying style of leadership, Mayor Welch will play a central role in guiding St. Petersburg’s continued growth and tackling some of the Tampa Bay region’s toughest challenges.”

Three months in, Welch has shown promise in his leadership of the city. He helped negotiate a contract dispute that ended with city employees getting a raise retroactive to October, and he raised the minimum wage for all city employees to $15. In one of his first official acts, Welch created a new position — assistant administrator for strategic initiatives. He appointed Neighborhood Affairs Administrator Rob Gerdes to the position. Welch said the office will grow to take on more issues but said Gerdes will prioritize housing full-time to begin.

A series of community conversations Welch held before taking office also highlighted housing affordability as the top issue among residents in the city. Welch’s administration released an action plan to address that, as well as other issues highlighted during the conversations. It also highlighted several actions the City Council and administration have taken to address housing, including diverting nearly $34 million of the city’s $45 million American Rescue Plan Act funds toward housing.

Welch has also kept St. Pete a part of the conversation to find a new home for the Tampa Bay Rays, and he’s recommissioned a study to explore future uses of Albert Whitted Airport.

“The first Black Mayor of one of Florida’s most up-and-coming cities has a unique window to solidify power early in his first term,” WFLA’s Evan Donovan said. “If he can by some miracle keep the Rays in St. Petersburg — which probably wouldn’t be good for anybody but St. Petersburg — there’s no telling what it would do for his political future. Having said that, what happens with the site could be equally as determinative.”

Welch’s approach to governing St. Pete has so far been a measured balance of his analytical prowess and his understanding of lived experience as a multigenerational son of South St. Pete.

Joe Henderson’s take: St. Petersburg’s first Black Mayor has made strides in turning a nonpartisan office into an actual nonpartisan office because he’s listening to all voices. His attempt to assess the future of Albert Whitted Airport is bold, but he’s going about it the right way.