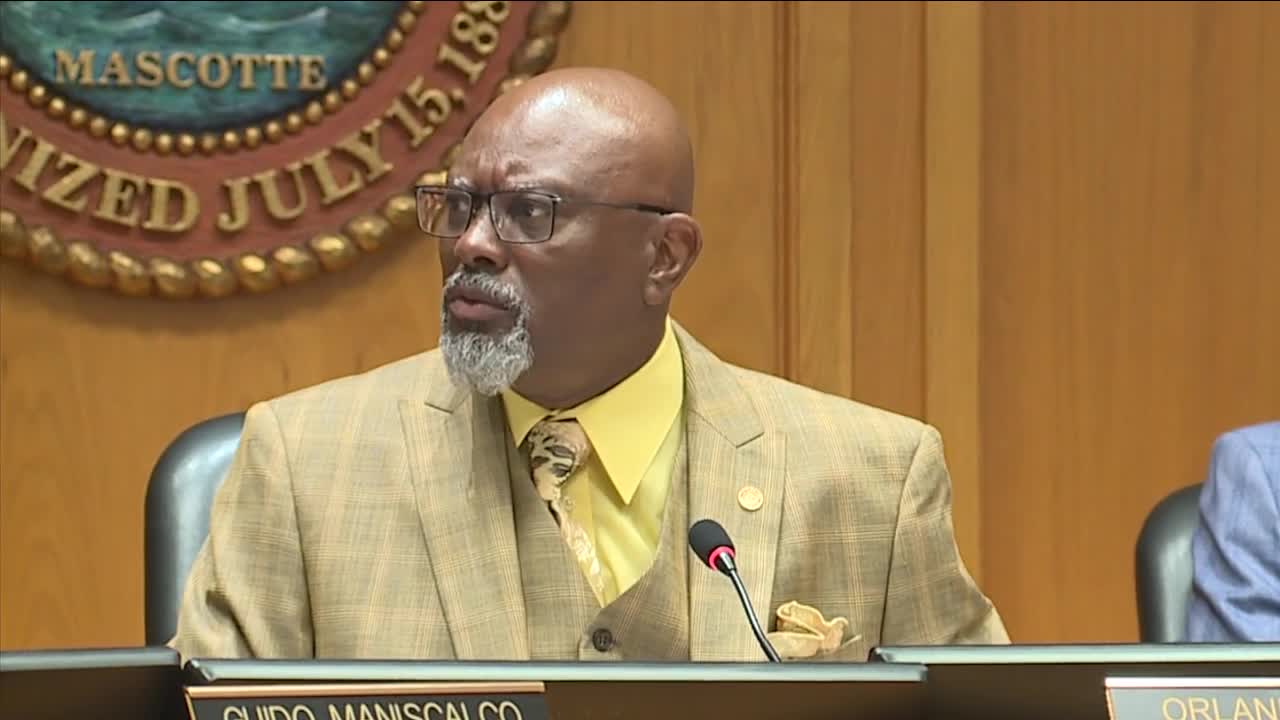 Just the facts. Nothing more.

The dam burst on July 29, but the pressure had been building for more than a year.

According to a 349-page file of supplemental documents to the investigative report on sexual harassment allegations against Tampa City Council member Orlando Gudes, his former legislative aide was working from home on the evening of October 13, 2020. She had been in the office earlier, then went home for an appointment with an air conditioning repair service. She had lunch and went back to her office in City Hall around 2 p.m. and left around 6 p.m. She picked up her daughter, went home and called her boss, Gudes, to pick up some paperwork.

According to the aide, when he arrived, he leaned out of his car’s window, sniffed the air around her vagina, and said “smells like a man’s been in there today.”

The next day, she contacted John Bennett, Mayor Jane Castor‘s Chief of Staff, to tell him about the incident.

“Subsequently, human resources met with her independently to complete the investigation into the matter,” said Kimberley Sullivan, employee relations manager for Tampa, in an email to HR director Kelly Austin. “During the meeting, (redacted) relayed an interaction with her supervisor that caused her discomfort. After recounting her concerns to human resources and receiving coaching on the matter, she agreed to speak to her supervisors about her concerns.”

Handwritten notes included in the file indicate the aide didn’t talk to him until Nov. 12, after discussing the matter with other members of City Council, including Vice Chair Luis Viera, and friends she had in the office. One note says a friend told her they would confront Gudes if she did not.

Notes written by Austin also indicate HR reached out to the aide at least five times in October to see how she was doing and if she needed help until she finally spoke to him.

“He apologized, said he was joking, and said if in the future, to let him know immediately and not hold it inside,” she told Austin and Sullivan in a phone call. “I said I have talked to him before but felt I was not heard.

“I said I might be on the hunt for something else and you can find someone you are comfortable working with. He said, ‘I will never find that.’ Maybe I could get a letter of recommendation from him. I told him his joke was inappropriate and had nothing to do with me being sensitive, that’s wrong, that’s not a professional relationship. He said he didn’t want me to go and if something bothers me to say something.” 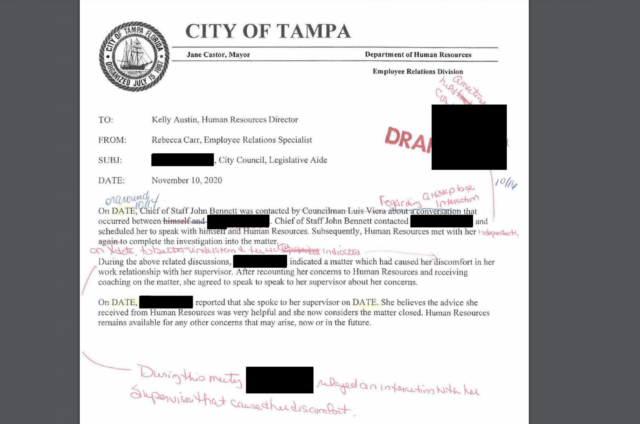 According to an email from Sullivan, the aide “now considers the matter closed.” A formal complaint or investigation was never launched and notes show the aide didn’t want to pursue the matter further and wanted everything to remain confidential.

HR told the aide she could come back if another problem arises. She said she understood.

“What am I trading?”

Over the next nine months, the woman continued as Gudes’ aide. But, she said, so too did the harassment and abuse. But Mr. Gudes’ aide said she endured. Her position offered a significant salary increase from her old job within the city and, as a single mother, she had to look out for was more than herself.

She began to ask herself questions as comments mounted.

One instance that caused her to question herself happened in early 2021, according to an investigative report from Trenam Law. While driving with her daughter one night, she said Gudes called on speaker phone. He began railing against fellow City Council member Joe Citro.

Notes in the 349-page supplemental file are as follows:

“Driving daughter to Sylvan, raining — he called on speaker — telling me about another council person, called them names. A p**sy motherf***er.”

She said she was shocked he would say that knowing her daughter was in the car.

“Okay, sorry,” he said according to the report. “Joe Citro.”

She also said he made comments about her appearance, telling her she should dress sexier and suggesting she get liposuction or a tummy tuck because there was too much fat around her midsection.

“(I) kept asking myself am I being oversensitive? (I) Wanted to keep my job,” the aide said in the file. “I have a kid — but what am I trading?” 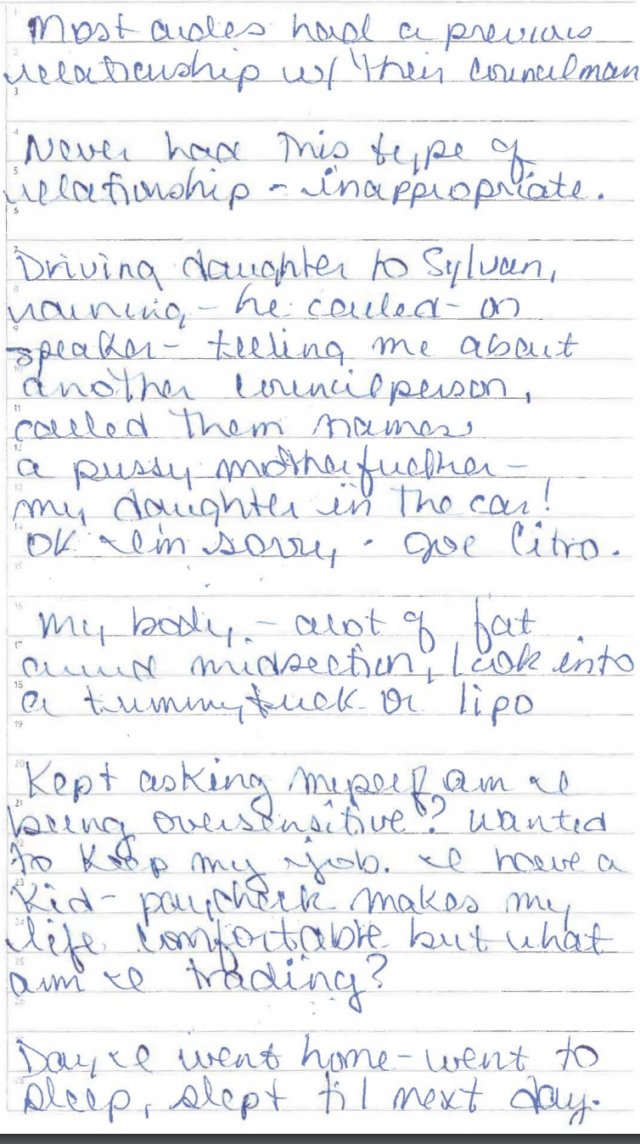 Gudes’ aide finally had enough on July 29, according to the report.

A letter from Gudes’ attorney, Ryan Barack, says the aide was supposed to contact the Buffalo Soldiers, an African American community organization, to receive a commendation during the City Council meeting. When they weren’t there, Gudes said he learned his aide did not schedule them. An argument ensued with Gudes telling her he’d handle it himself. 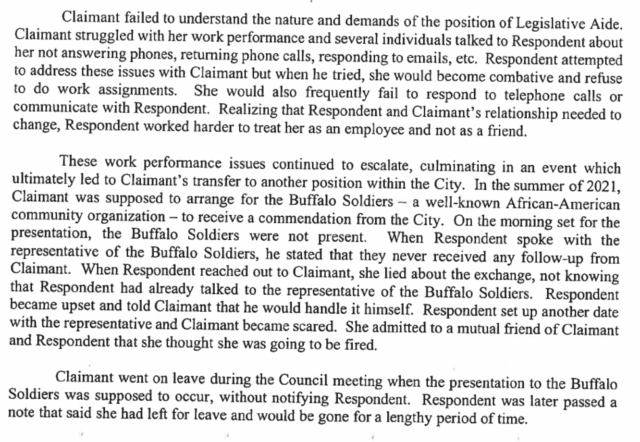 The details of the argument are not in the report or part of the sexual harassment claims. However, after the argument, the aide left City Hall, later sending a note that she would be on leave until Aug. 16, 2021.

According to the city, HR contacted her on August 9 to check on her because of the nature of her departure and her previous issue with Gudes. She said she didn’t need help, but said she decided she wanted to be transferred to a different department. An HR rep said they’d contact her later in the week.

An email between Austin and Employment Services Division Manager Mike Swain from Aug. 10 shows the city began to look for a possible placement. 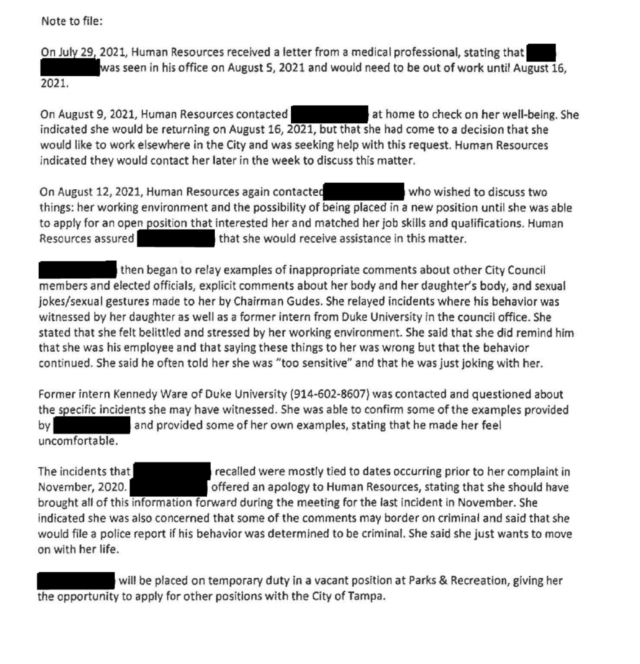 On Aug. 12, HR called again. The aide wanted to talk about a new placement and her working environment. It was then that the city first learned the extent of the alleged abuses. She told HR the incidents happened in front of her daughter and Kennedy Ware, an intern from Duke University. During the Aug. 12 disclosures, staff noted the aide apologized for not telling HR her issues sooner and not asking them to communicate with him from the beginning.

“Afraid of being all over the news. Just want to move on with my life,” the notes say. “Feel like I owe an apology for not being more forthcoming before. (I) was afraid. He’s a first time supervisor. I like helping people. It’s not the duties, it’s the person.”

On Aug. 13, Gudes contacted HR and said, “I would like to ask that you locate a position, possibly within the Paris & Recreation Department, for her. In light of her recent health challenges, I believe it might be in her best interest to be placed within a less stressful environment.”

On Aug. 16, the city began communicating with Ware.

On Aug. 18, a reporter from the Tampa Bay Times submitted a public records request for “any and all documents, including but not limited to (redacted) departure from City Council Chairman Orlando Gudes’s office. To scale my request, l’d like to examine (redacted) personnel file as well as obtain any formal or informal complaints she may have made about Chairman Gudes to any city department or official, including Chief of Staff John Bennett.” 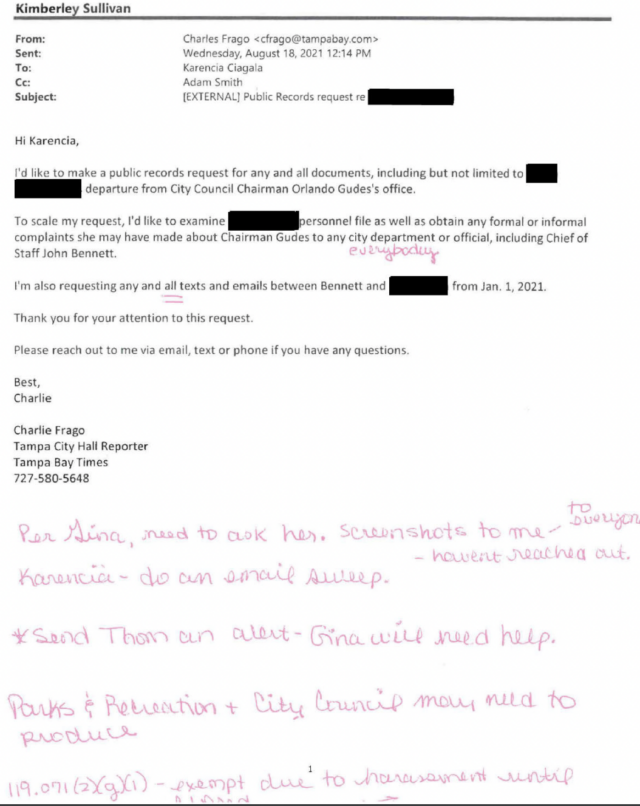 On Aug. 19, notes from a call said HR spoke to Ware and “she was able to confirm some of the examples provided by (redacted) and provided some of her own examples, stating he (Gudes) made her feel uncomfortable.”

Meeting notes from that same day show the administration quickly went into crisis mode, looking at how it could protect the aide while also honoring a legal obligation to investigate the mounting allegations.

Handwritten notes from an Aug. 19 meeting with City Attorney Gina Grimes, Austin, Bennett and Sullivan show how the city’s administration coordinated to discuss options and strategies. 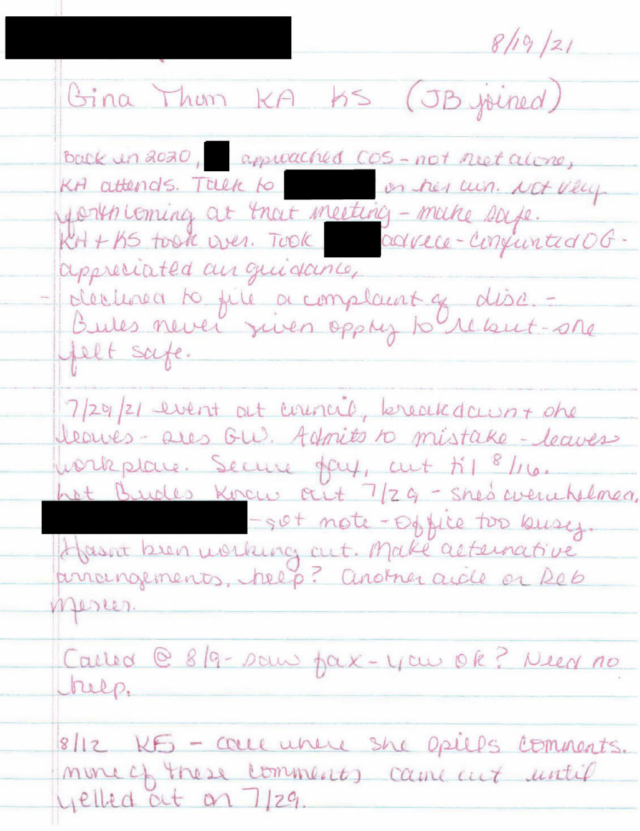 The notes go on to say someone, whose name is redacted in the report, encouraged her to come forward.

The notes continue to state that Gudes was still unaware of her issues and didn’t need to be told yet because an investigation into a complaint of discrimination would be confidential.

The notes then say the city needed to assure the aide she would remain anonymous and would not fear retaliation.

“We need to reach out and explain we have to do this,” the notes say.

Then, the notes say Grimes advises staff to “centralize but keep contained. Talk to Mayor and Adam (Smith, communications director). No comment refer to us.” Notes then say “Gina will talk to Adam and Mayor.” 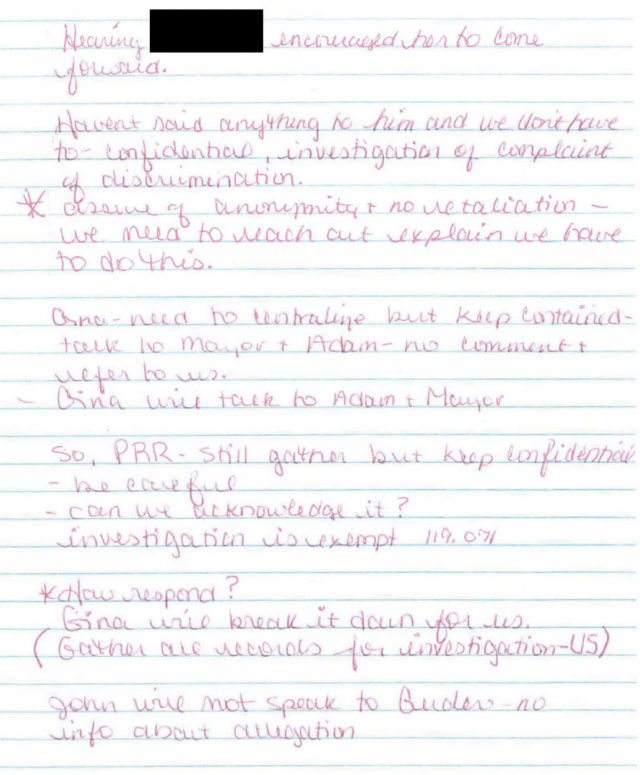 The notes also display the thought process and concerns with moving forward.

Staff indicated it would still gather information, but keep the inquiry confidential. Staff members questioned whether they could even acknowledge an investigation.

They also questioned how to respond. Grimes was to break it down for them. Staff was advised to begin gathering records for an investigation. It was suggested Bennett not speak to Gudes about the allegations.

Staff then looked at what to do with the then-confidential 2020 incident.

“We control disclosure of 2020. We don’t want her to say we did nothing,” it said in the notes. “Basically, he fired her but we are placing her, no obligation to do so.” 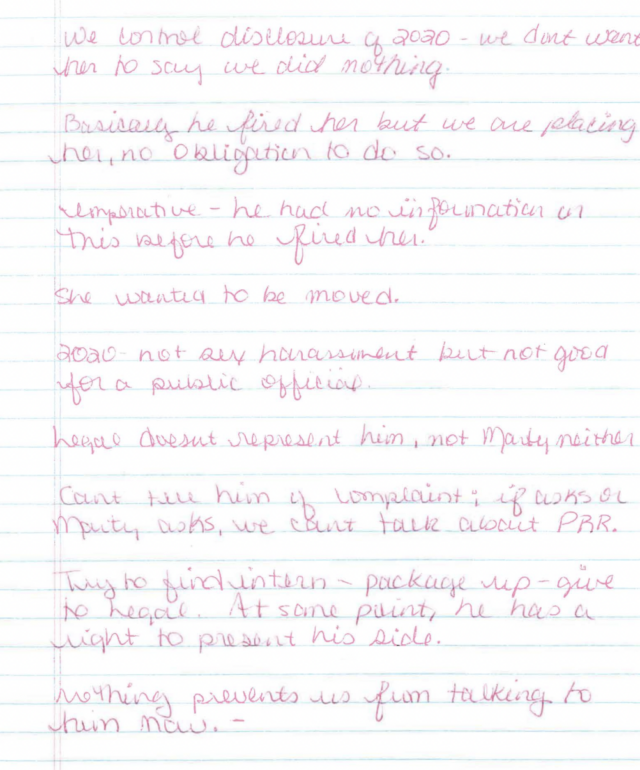 Notes go on to question whether the 2020 incident was sexual harassment or not, noting it was not good for an official either way. They also discuss how to handle telling Gudes or City Council Attorney Martin Shelby. It was ultimately decided it would be okay to tell Gudes at that point.

The notes then shift to how the city should deal with results of an investigation. Staff asked if the investigation should be taken to the U.S. Equal Employment Opportunity Commission or perhaps the Ethics Commission. It also notes that staff could not discipline an elected official, but had a duty to investigate claims and protect employees. 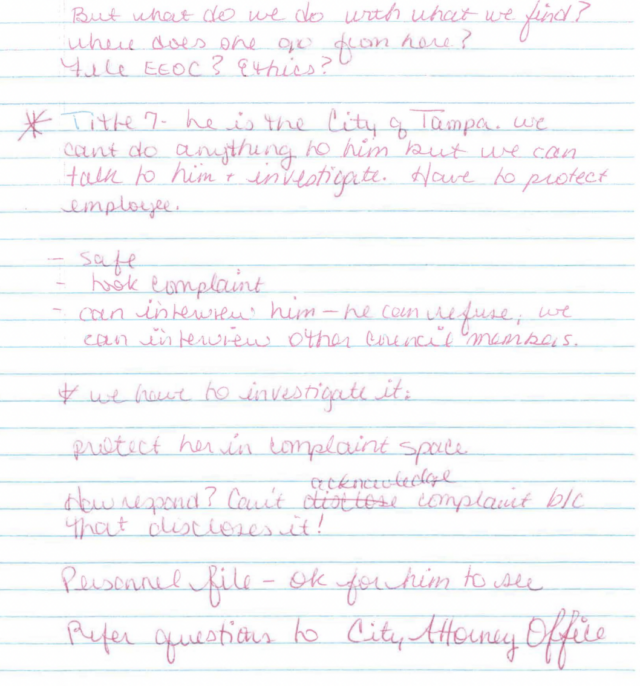 “We can’t do anything to him but we can talk to him and investigate,” the notes say. “Have to protect employee.”

Adding, “We have to investigate. Protect her in complaint space.” 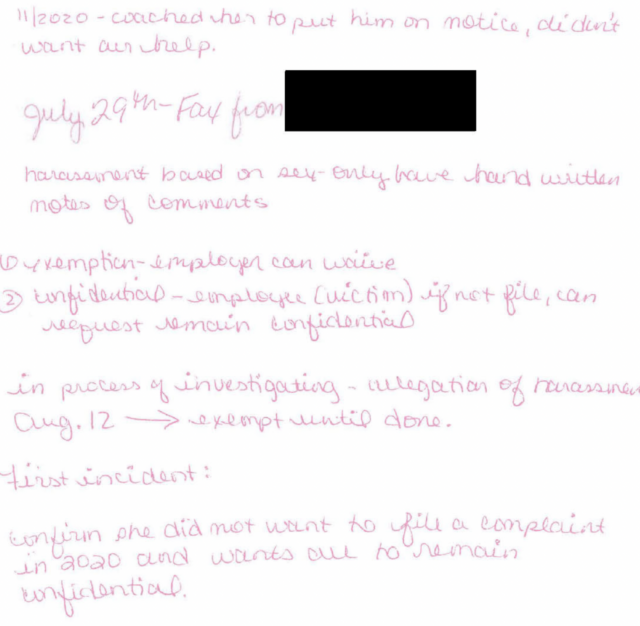 The city then hired independent firm Trenam Law to conduct the investigation. The initial complaint led to more details, witnesses and interviews. Ultimately, Trenam found 18 of 19 potential instances of harassment were likely to have occurred. The report said 20 witnesses were interviewed, credibility was evaluated, and documents from staff and witnesses were examined.

The Trenam report indicates much of the corroboration came from Ware, who verified and expounded on other claims.

On Nov. 3, the aide wrote to Trenam, saying, “I do not wish to continue with this investigation. I have informed city of Tampa HR that I am leaving and I do not want to do this anymore please stop.”

But the investigation had already been going on for nearly two months and the city said it had a legal obligation to complete it.

Trenam finished its investigation on Jan. 27. HR then sent the investigation to independent counsel Thomas Gonzalez to review findings. Barack was sent a copy and responded to Gonzalez on Feb. 23. The same day, the aide received a call from a Times reporter asking why the investigation was taking so long and said the delay seemed to be a political tactic by the Castor administration. The reporter then read her a statement Gudes had read to him. The aide filed an affidavit for the incident on Feb. 24. 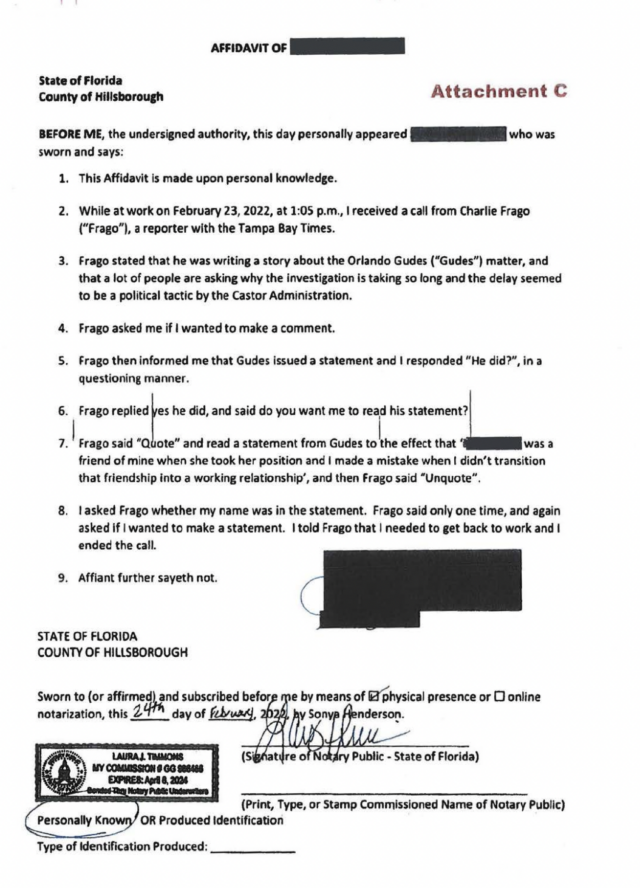 Later that afternoon, Smith released a statement, then an official news release, highlighting aspects of the investigation and including a statement from the Mayor.

After that, the deluge.

‘A reputation as a screw-up’: Orlando Gudes’ career marred by anger issues, abuse and that time a kid shot someone with his gun.