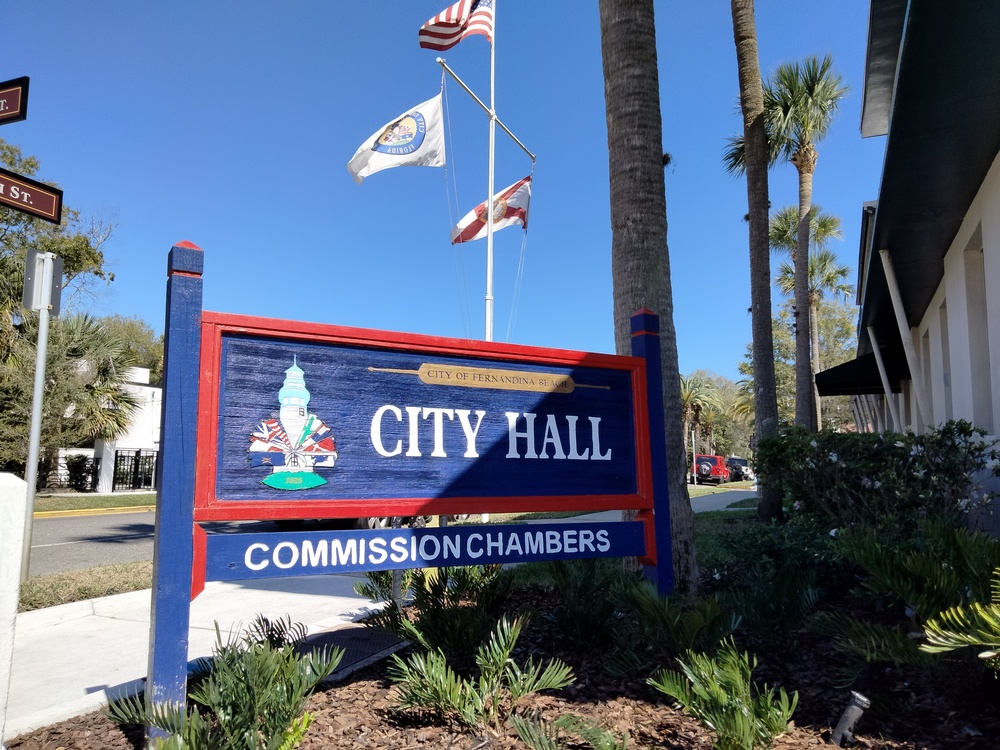 It would be that the latest heated controversy over Amelia Island’s trees would be set for discussion at the same city of Fernandina Beach meeting in which the Mayor read a proclamation recognizing National Arbor Day in the city.

Mayor Mike Lednovich noted the arboreal debate that was to come — five of six people signed up to speak did so to talk about the tree conservation controversy — before reading his proclamation.

“Whereas,” Lednovich read, “trees provide indescribable beauty, increase property values, enhance economic vitality, produce oxygen, clean the air, reduce temperatures and cooling costs, help capture stormwater above and below ground, provide exceptional wildlife habitat, protect life and property, as well as provide natural shelter from storms; and whereas, the city of Fernandina Beach and its citizens recognize the significance of planting, maintaining and preserving individual trees to sustain and renew the health of our environment and maritime forest;” he declared April 29 Arbor Day in the city.

It’s in that stated recognition of the trees’ significance — or perceived lack thereof by some property owners — that drove the discussion.

“Last Wednesday afternoon, several neighbors and I got an email that several mature trees were to be cut down on the lot next to me, on Friday morning,” historic district resident Robin Towles said at the City Commission meeting earlier this week. “Not much time to do anything about it. Two were pecans — one was at least 100 years old — and one was a beautiful laurel oak. We were told they were unhealthy or dying and certified by an arborist.

“I wasn’t surprised, because this same neighbor owns another property that borders my lot, and had cut down four other mature trees last year with no warning.”

There were no repercussions for cutting down these seven trees, she said, and no real effort to prevent it. The historic district is so highly regulated and changes require such notice, Towles said she’s well aware of what goes on in her neighborhood ahead of time, except for what seems to many like wanton destruction of one of Fernandina Beach’s crown jewels.

She suggested the city apply the same type of management controls used in historic districts to the city’s trees. Part of the problem, Commissioner Len Kreger said, lies in Tallahassee.

“No. 1, those trees were cut down consistent with state law, which we don’t like and the whole state of Florida doesn’t like. It’s (Florida Statute) 163.045, which says if the arborist deems a tree dangerous, that they can be cut down, and the city has no authority or can require a permit.”

There was a change to the law from the last Session, he noted, and organizations are pressing Gov. Ron DeSantis to sign Senate Bill 518.

“That is not going to solve the problem,” Kreger said. “All that does is put a little bit of teeth in it in terms of saying that the tree assessment must be done in accordance with the international arborist standards, and at (a danger risk of) moderate or less. That may be beneficial in terms of if we have honest, creditable arborists who don’t want to push the envelope on ‘moderate.’ So, it will help.

“One thing that will help today is that we encourage people, the citizens, to come to the city when you have to have a tree evaluated on a private property relative to maybe an insurance need or something. That way the arborist, our arborist, can actually go out and do the tree assessment by the standards.”

There was one in the city last week relative to an insurance claim — pursuing this path can save money and result in the tree remaining, he said, but people who are out to remove the trees can use the system designed by the state to do so.

Another move is for the city to put in a legislative request, but they can’t do that until November.

“This morning I talked to Sen. (Aaron) Bean, I talked to our lobbyist Buddy Jacobs, I talked to the Regional Board, which will bring it up at the regional (meeting) — that’s seven Northeast counties,” Kreger said.

Both Amelia Island members of the County Commission are on board with moving forward with that idea, which Kreger said they will do.