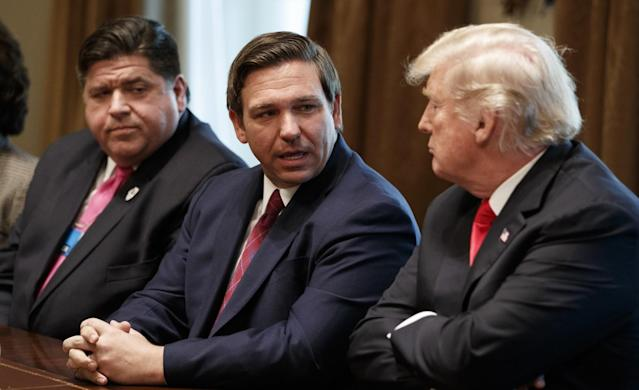 As discussion of a potential Ron DeSantis run for the presidency in 2024 intensifies, Donald Trump is trying to put the Governor in his place.

During a Thursday morning Newsmax interview, Trump was asked about a potential “Trump-DeSantis ticket in 2024.”

That would place Trump atop the ticket of course, with the Florida Governor in a subordinate role.

Trump offered a cagey response to the question.

“Well, I get along with him. I was very responsible for his success because I endorsed him and he went up like a rocket ship, just like I endorsed Mary Miller the other day,” Trump said, referring to a candidate he endorsed in Illinois who won Tuesday. At a rally with the former President, Miller called the overturning of Roe v. Wade a “victory for white life,” before her spokesperson released a statement calling the remarks “a mix-up of words.”

He then referenced his endorsement of Darren Bailey, the Republican MAGA acolyte who got the nomination in Illinois against incumbent Democrat J.B. Pritzker, as another apparent comparison to the DeSantis backing.

Trump has continually maintained (including in another recent Newsmax hit) that he was “very responsible” for DeSantis’ political rise, endorsing him against Adam Putnam for Governor ahead of the 2018 Primary to replace Rick Scott. Clearly, Trump maintains that view.

The former President also expounded on his performance in public opinion polls.

“I’m leading in all the polls. Against Republicans and Democrats. I’m leading in the Republican polls with numbers nobody has ever seen before and against (Joe) Biden and anyone else they want to run, I’m leading against them,” Trump said.

Trump has often repeated quotes along these lines as DeSantis has become more of a peer figure among the grassroots GOP.

While there indeed are some national polls and state polls that show Trump dominating the field, other state polling suggests that DeSantis may be the standard bearer Republicans seek in 2024.

A new poll by the University of New Hampshire shows DeSantis with 47% support against Biden, who had 46%.

DeSantis also is strong in a potential Primary. He earned 39% with former President Trump two points behind the Florida Governor. Way back in third place: former Vice President Mike Pence, with 9% support.

These leads are well within the margins of error for the respective surveys, so these are statistical ties, but they indicate where momentum is going in the pivotal first in the nation Primary state.

DeSantis also was the top second choice GOP Primary candidate, drawing 30% support in that role compared to 24% for Trump. A full 60% of those who chose Trump as their main preference saw DeSantis as their preferred alternative, yet another indication DeSantis’ star is on the rise.

DeSantis also was the most popular candidate among potential Primary voters, with 66% net favorability, 20 points higher than Trump and even farther over the rest of the field.

DeSantis continues to deny any interest in a presidential run, mocking what he called media “obsession” about a potential campaign in a recent press conference, and continuing to be coy when asked about 2024 “nonsense.” He sidestepped this topic as recently as a Fox News interview this month. He also continues to downplay recent straw polls showing him as a leading presidential contender in 2024.