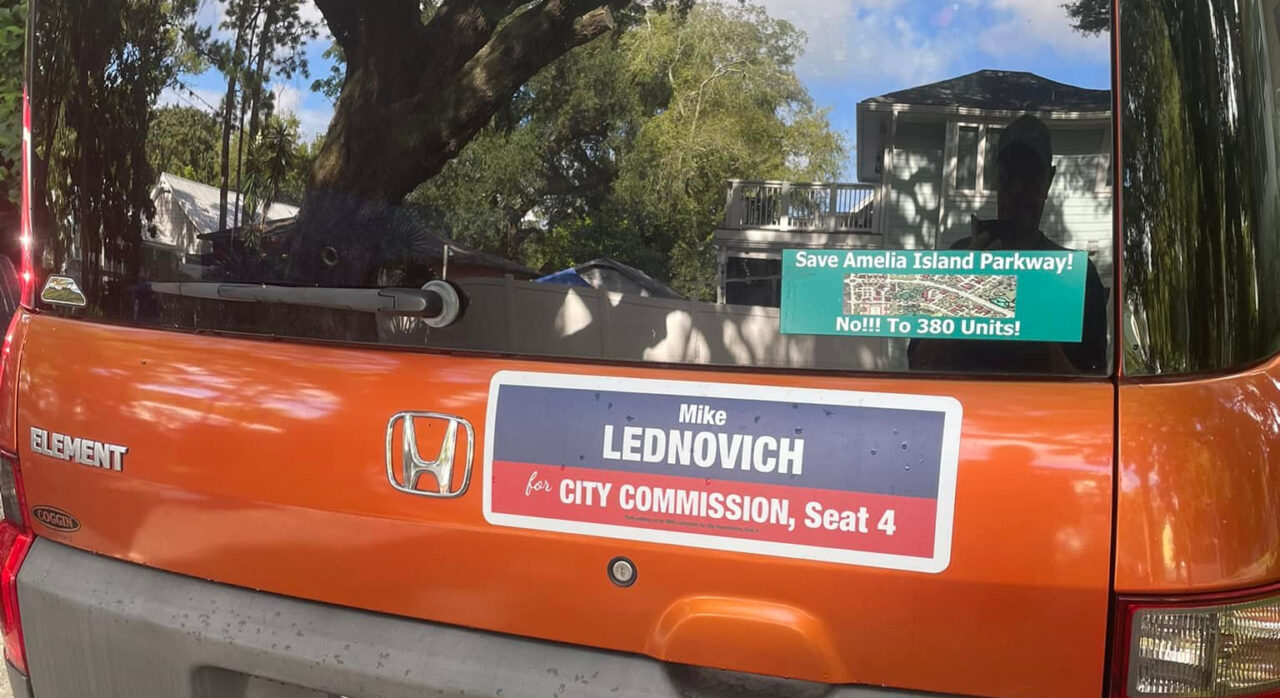 Mike Lednovich’s time as Fernandina Beach Mayor is ending — at least for the moment — but his attempt to remain on the City Commission is being tested by three others seeking his seat: James Antun, Chelsey Lemire and Christopher Nickoloff.

Fernandina Beach’s city government has a Mayor, but a person can only run for the job if they’re already an elected Commissioner in a seat that isn’t on that year’s ballot. It’s both Lednovich’s re-election year and the next mayoral election, so he’s unable to run for that spot this year.

Lednovich picked up a $1,000 contribution in April, and a couple of hundred dollars here and there, plus what amounts to numerous in-kind donations from Lednovich himself counted as contributions and expenditures. He raised more than $2,100 and spent all but $531 of that going into last month.

Lednovich emphasizes “quality of life,” a term of importance in municipal policy but one that can be hard to define and realize in concrete terms. One of the issues factoring into Fernandina Beach’s quality of life is the natural environment in which it sits.

“Despite strengthening the City’s Tree Protection Ordinance, we are losing the fight to maintain our valuable tree canopy,” Lednovich said in a campaign statement. “Wetlands and natural habitats are also under attack by developers looking for profits over the quality of life on Amelia Island.

“Recently, the state undercut our ‘Home Rule’ authority allowing unscrupulous tree removal companies in the city allowing them to cut down healthy oaks without any penalties. The city recently passed a ‘no solicitation’ ordinance to block these companies from operating on the island.”

Nickoloff went to family and friends early in his fundraising to bring in a race-leading $3,100, compared to Lednovich’s $2,100. Antun, who describes himself as a conservative libertarian, posted $2,000 in his account, and Lemire posted $500.

Before moving to Florida four years ago, Nickoloff was a career fire service professional in Colorado. In July, he drew a $1,000 contribution from the Colorado firefighters’ union and a $500 check from Jacksonville’s firefighters.

Nickoloff had a little under $2,000 on hand going into last month. Meanwhile, according to their reports, Antun and Lemire have yet to spend anything.

“Our infrastructure continues to get beat down daily by visitors,” Nickoloff said. “And with the growth planned off the island, visitation will most likely increase. While there is some revenue generated by visitors to the city in the form of sales tax, the brunt of the burden of maintaining that infrastructure currently falls upon the city property taxpayer.

“This is not fair to our property taxpayers and is unsustainable. New sources of revenue in the form of user fees must be identified to ease the burden of ad-valorem taxpayers.”