‘I intend to get to the bottom of exactly what happened, why, and how.’

On Friday, Book sent a letter to Florida Department of Transportation (FDOT) Secretary Jared Perdue demanding several details about a $12 million program DeSantis received an earmark for in the 2022 state budget.

According to Geoffrey Freeman, director of the Martha’s Vineyard airport that received the two Florida-funded flights Wednesday, the flights originated in Texas. If that is accurate, the DeSantis administration may have violated its own rules.

“On page 494, section 185 of (the 2022 state budget) it is a requisite condition for the use of appropriate funds that your agency … must first develop and ‘implement a program to facilitate the transportation of unauthorized aliens from this State consistent with Federal law,’” Book wrote.

Book then requested the following information:

— The date of establishment and language dictating operation of the program.

— The authority or legal opinion used to allow state funds to be spent on transporting people from Texas.

— Clarity on whether a person referred to as “Ms. Perla,” who reportedly told the migrants they would be granted expedited work permits if they agreed to be relocated, is an FDOT employee.

— Whether FDOT provided a videographer for the flights.

“Given the attention surrounding this matter, I fully expect that you have this information available, and will provide it to me by the end of the day,” she wrote.

In a statement, Book blasted DeSantis for using migrants as “political pawns,” adding that the “widely reported details of this fly-by-night partisan stunt appear to violate Florida law.”

“I intend to get to the bottom of exactly what happened, why, and how,” she said. “Basic human decency is not a partisan issue, and the actions of the Governor have rightly alarmed Democrats.” 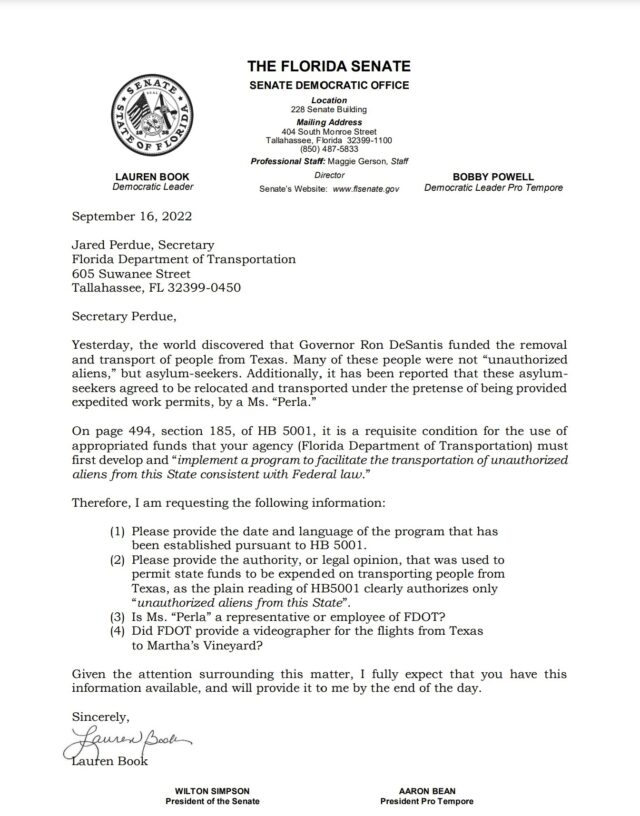 Of note, Book joined 32 other Senators in approving the state budget, including the $12 million earmark for the migrant-relocation program, which passed without a single “no” vote in the Senate.

On Thursday, Abbott sent two busloads of migrants to be dropped off near Vice President Kamala Harris’ home in Washington.

DeSantis has been consistent in his opposition to illegal immigration. While in Congress, he backed several bills meant to prevent such action, including the Zero Tolerance for Illegal Entry Act of 2018. When he ran for Governor that year, he vowed to restrict illegal entry to the U.S. and ran a campaign ad in which he told his young daughter, who was playing with toy blocks, to “build the wall.”

Speaking before a packed ballroom Sunday during the National Conservatism Convention in Aventura, DeSantis denounced “mass immigration” to a round of applause.

Two days later, DeSantis’ former Press Secretary Christina Pushaw, now a spokesperson for his re-election campaign, told convention attendees states and cities with friendlier policies toward undocumented immigrants are getting what they asked for.