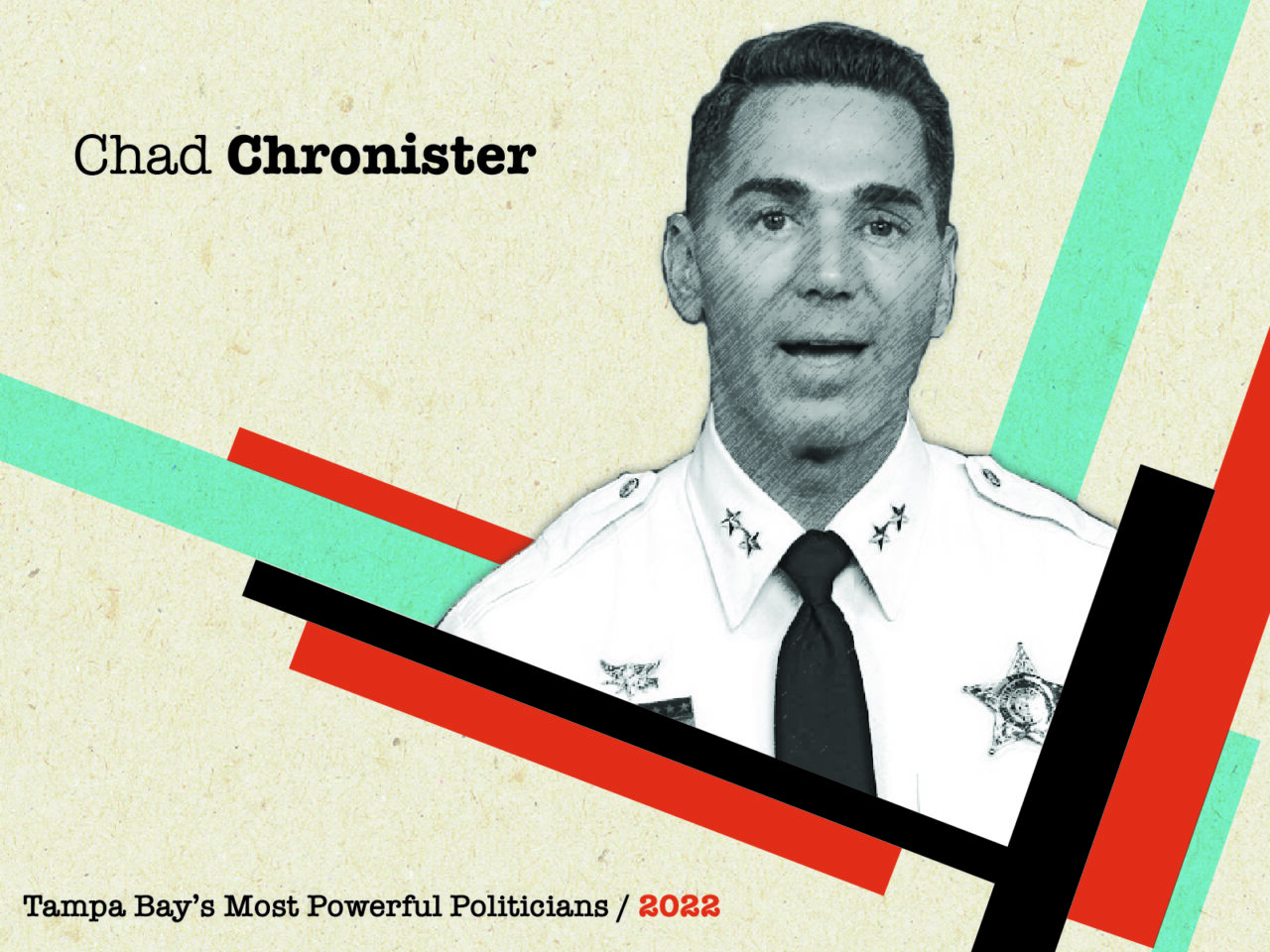 Chronister's success is anomalous in Hillsborough where he is the lone Republican elected to one of the county's five constitutional offices.

Hillsborough County Sheriff Chad Chronister had an impressive showing on the list since his inaugural appearance at No. 23 before even being elected.

Chronister, a 30-year veteran with the Hillsborough County Sheriff’s Office (HCSO), was appointed to the role in 2017 after the retirement of David Gee. He easily walked through his first election against Gary Pruitt in 2018 with almost 55% of the vote. In 2020, he wrested 62% of the Primary vote and again bested Pruitt with 55%. Pruitt’s share, however, dropped from 45% to 36% thanks to the addition of Independent Ron McMullen, who took about 9% of the vote.

“Charismatic, humble, likable. Not always the first words that come to mind when you think of a Sheriff — especially an effective one,” said Natalie King of RSA Consulting. “And yet, these are the qualities Sheriff Chronister brings to Hillsborough County Sheriff’s Office, where he leads a strong team with a proven track record of making our county a safer place. He has extensive knowledge and expertise in law enforcement, but what sets him apart is his commitment to getting out into the community, making connections and taking time to fully engage with the residents to understand them and their concerns.”

Chronister’s growing history of success is likely to increase heading into the 2024 election cycle. He’s already signaled caution to would-be challengers with more than $1 million in his war chest more than two-and-a-half years out from the election.

“In one night, three years before his re-election bid, he raised over $1,000,000 for his political committee,” GOP Consultant Anthony Pedicini said. “He has fostered direct connections to area leaders and legislative leadership which he has quietly used to mark some unobserved but noteworthy legislative successes. He has changed policies and hiring procedures that have produced results in a fast-growing county.”

And that success is anomalous in Hillsborough where he is the lone Republican elected to one of the county’s five constitutional offices, which also includes the Clerk of Court, Property Appraiser, Tax Collector and Supervisor of Elections. His fundraising is even more impressive considering the Hillsborough Republican Executive Committee has been in open revolt, with some even splintering to form separate fundraising groups.

“Sheriff Chronister continues to defy electoral statistics as the last Republican standing in Hillsborough County constitutional or countywide office,” Pedicini said.” His secret is simple. He’s honest, straightforward and isn’t fearful to discuss topics that make most Republicans uncomfortable. At his core, he is a lawman and in the last several years as Sheriff he has begun to spread his political wings and flex some muscle.”

One of his recent legislative successes was securing $2 million for his agency’s K-9 program. The funds will help construct a new law enforcement K-9 training and boarding facility where K-9s and handler teams can train and have secure boarding. The facility would also provide a space for other organizations’ K-9 and handler teams to train. The facility is projected to cost $4 million over the next two years. Funds are expected to be requested next year for the facility’s boarding area.

Chronister also displayed measured leadership during the COVID-19 pandemic. He played a crucial role in the pandemic’s early days serving on the now-defunct Emergency Policy Group, which was tasked with setting policy on the pandemic.

Chronister mostly stuck to the law enforcement perspective on how to enforce policy proposals. He was among six members who initially voted against implementing a stay-at-home order, but later voted with the rest of the group to install one. Chronister was among three members, all Republicans, to vote against the county’s mask mandate.

But he put duty before the politicization of COVID-19 when he had deputies arrest Brandon pastor Rodney Howard-Browne for continuing to hold crowded in-person services at The River at Tampa Bay church in violation of the county’s stay-at-home order. Republicans criticized Chronister for the move, but Chronister said at the time he was doing his job, which is to enforce the law.

That adherence to duty also resulted in the high-profile firing of a 21-year HCSO veteran. Chronister not only fired the deputy for pointing a gun at a suspect’s head, but he also had him arrested for aggravated assault with a deadly weapon. Chronister drew praise for the move, which came amid nationwide protests over police brutality, a beef not often shared quite so loudly among conservatives.

Joe Henderson’s take: He’s the only Republican elected to a constitutional office in Hillsborough County, which should tell you how voters feel about him. He’ll speak up when it’s necessary, such as when he told people to “stop listening to politicians” and “start listening to medical professionals” and get vaccinated against COVID-19.