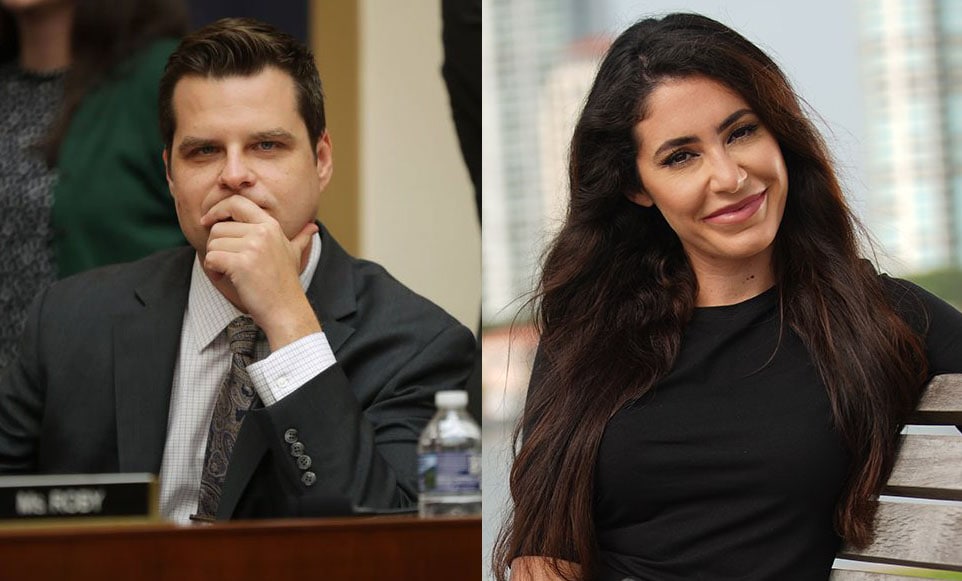 U.S. Rep. Matt Gaetz is coming to Largo on Saturday as part of the Congressman’s ‘Freedom Tour’ — a speaking trip Gaetz embarked on amid a federal investigation of sex trafficking a minor.

The Largo stop, which is set for 6 p.m. at the Conservative Grounds, is part of a series of rallies that kicked off in Arizona in May. Gaetz is joined by controversial Georgia Republican Rep. Majorie Taylor Greene on the tour.

Now, Luna is running for the seat again, which will be open and up for election in 2022. But, will she receive the same support from Gaetz as she did previously? And does she even want his support?

His endorsement likely boosted her initial campaign among Republicans, when Gaetz had emerged as a national voice supporting former President Donald Trump during impeachment proceedings.

That was before news came out in 2021 that Gaetz is involved in a federal investigation into whether he was sex trafficking a 17-year-old girl.

Gaetz, who hasn’t been charged with a crime, has consistently denied accusations he was involved in sex trafficking a teenager across state lines or ever paying for sex. That’s despite reports of a paper trail of financial transactions, some through Greenberg, of cash being sent to young women. 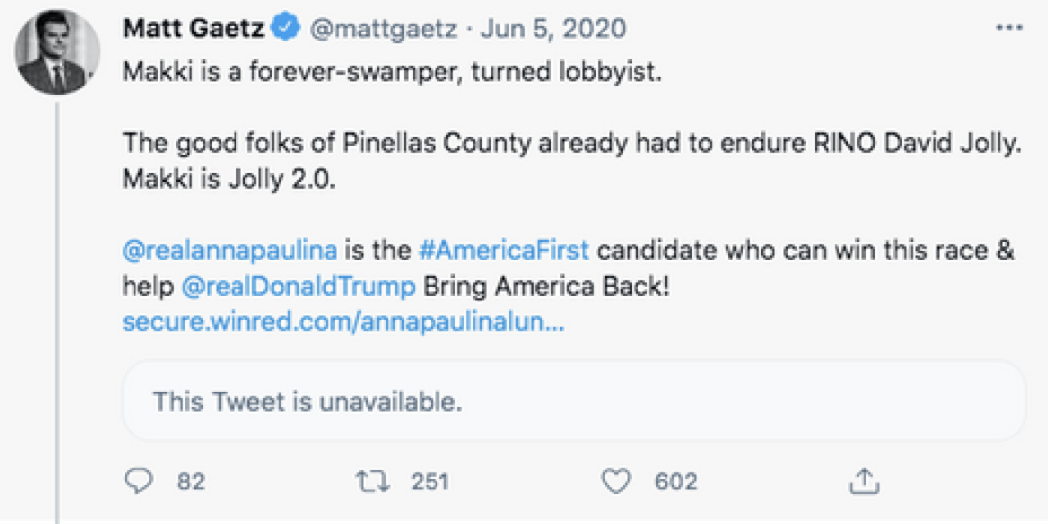 Sources familiar with the case have said charges against Gaetz could come this month. Former Seminole County Tax Collector Joel Greenberg, a central figure in the scandal believed to be cooperating, was granted a 90-day delay for sentencing after pleading guilty to sex trafficking of a child and five other felonies.

The flurry surrounding the initial news of the investigation led to many previous associates of Gaetz to distance themselves from the Congressman. But, not Luna — at least not initially.

“@RepMattGaetz is one of the TOP conservatives in our country. I believe a bureaucrat would try to take him down. @mattgaetz is my friend. He has only ever been extremely respectful and kind to both my husband and myself. #IbelieveGaetz,” Luna says in one post in response to Gaetz calling the investigation an extortion job.

And, in an email to Florida Politics, Luna’s campaign maintains that she still stands by that statement.

“Her prior statement about the Congressman stands,” her campaign told Florida Politics, in reference to the previous tweet about Gaetz. “Nothing has changed.”

Luna’s Primary Election opponent, political strategist Amanda Makki, was also a subject of one of Gaetz’s tweets reposted by Luna. In that post, Gaetz writes, “Makki is a forever-swamper, turned lobbyist. The good folks of Pinellas County already had to endure RINO David Jolly. Makki is Jolly 2.0. @realannapaulina is the #AmericaFirst candidate who can win this race and help @realDonaldTrump Bring America Back!” 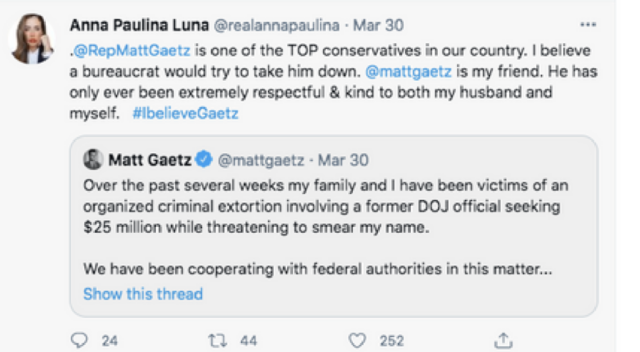 Now deleted, along with almost all other tweets before April 26, it’s unclear if Luna still associates with Gaetz. Even more unclear — whether Luna will be seeking an endorsement from the Congressman.

According to an email from Luna’s campaign to Florida Politics, Luna’s tweets autodelete after a certain period of time, providing an explanation for the deleted posts. As far as her attendance, her campaign wrote that she is not in town, so will not be there.

Makki, who entered the race last Tuesday ditching the moderate label and diving in head first into Trump territory, has no plans to seek out an endorsement from Gaetz, her campaign wrote in an email to Florida Politics.

“Amanda has no plans to ask for, nor does she have any reason to expect an endorsement from Rep. Gaetz. The endorsements that count are the voters of CD 13,” her campaign said. “

She also won’t be attending the event, as her schedule is filled. In a statement sent to Florida Politics, Makki compared Luna’s separation from Gaetz to that of Trump.

“Anna Paulina Luna’s tweets show her clear defense of Rep. Gaetz which she then attempted to hide by deleting them and abandoning Rep. Gaetz like she did President Trump in the general election last year,” Makki said in a statement. “This is the latest in a pattern of Luna’s phony and opportunistic moves that go back to a now-deleted blog post where she called herself ‘a two time very avid supporter of Obama in my early years and considered myself a Democrat.'”