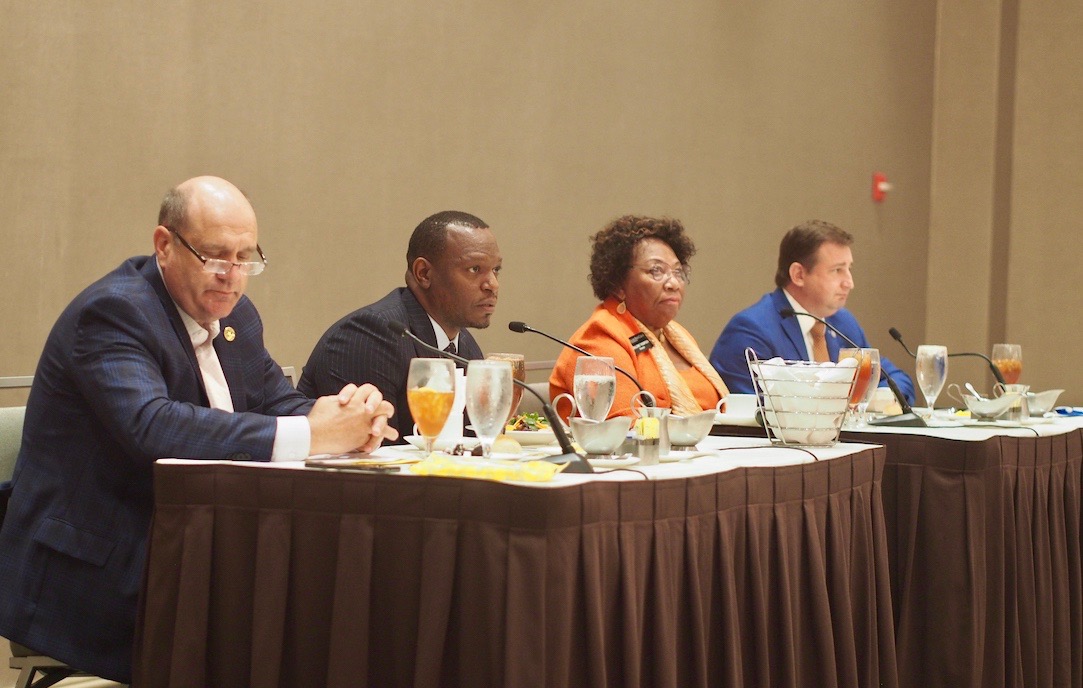 The 2021 Legislative Session began with a bevy of unknown dynamics thanks to the pandemic and then was driven by “things of great consequence” or “bogeymen,” depending on lawmakers’ partisan points of view.

“There was a lot of unknowns, particularly with the pandemic and questions about the pandemic and the questions about the budget. But toward the middle of the Session we recognized that we were addressing some things of great consequence — vulnerable children, resiliency, sea rise, environment,” Republican Sen. Jason Brodeur of Sanford told the Tiger Bay Club of Central Florida Friday.

“This Session was about bogeymen,” countered Democratic Rep. Geraldine Thompson of Windermere, who later cited a couple: the Republican-dominated Legislature’s efforts to ban transgender athletes from competing in girls’ sports, and to reduce voter fraud exposure by reducing vote drop boxes and other measures restricting voting.

The panel offered few surprises, with Brodeur and Truenow hailing the Legislature’s accomplishments during the 2021 Legislative Session and the Special Session on gambling in May, while Thompson and Bracy expressed disappointment, though finding solace in some victories.

The four, particularly Brodeur and Bracy, sought to talk about areas where Republicans and Democrats came together. Brodeur discussed his efforts to push for septic-to-sewer conversions, mental health programs, substance abuse programs, and other programs to help the state’s most vulnerable populations.

Bracy touted his efforts to create a state scholarship fund for descendants of the 1920 Ocoee Massacre, and other students from Ocoee, and his criminal justice reform initiatives, which wound up being part of the Republican-backed criminal justice reform bill. That bill also included Thompson’s proposal for a statewide database of police misconduct.

But partisan divides also showed up. When the Democrats were asked about times they had crossed party lines to support Republican bills, Bracy and Thompson both obliged. But when asked about times Republicans broke with party leadership, neither Brodeur nor Truenow offered an example.

However, Brodeur did, reluctantly, offer a disagreement with Republican leadership in a hypothetical situation, suggesting he does not agree with the provision in Gov. Ron DeSantis‘ COVID-19 “vaccine passports” ban that applies to cruise ship companies.

“I’m kind of a liberty guy,” Brodeur said. “I also know that I don’t interfere with private businesses. Just like it’s my choice whether or not I want to do it, it’s a businesses choice to decide whether or not to make that a condition for what they want to offer. I have a choice not to go.”

Brodeur defended the bill to restrict statewide initiatives by limiting donations to support groups, saying the republic form of government calls for the Legislature to address most of those proposals.

Bracy and Thompson decried the transgender and voting bills.

“I think it’s those kinds of things that are intended to create barriers to democracy,” Thompson said of the voting bill. “I think discouraging people from participating in democracy is scary, and is conjuring up the bogeyman.”

The transgender bill also was based “on another bogeyman,” Thompson said. “I think it’s sending a signal … that demonizes these children.”

Brodeur said the bill was intended to prevent girls from getting hurt competing against potentially larger and stronger transgender girls. “My vote was really about safety of children,” he said.

Brodeur, Bracy, and Thompson all are veterans of the Legislature, all having served in the House and Senate. Freshman Truenow often got lost in the shuffle.

Yet he occasionally held his own, noting his top legislative initiative to create wildlife corridors — sponsored by Brodeur in the Senate — could have profound long-term benefits for Florida’s natural areas.

He also stood strong when pressed on whether his constituents spread across northwestern Orange County and northeastern Lake county, who are famously conservative, would approve of the record $101.5 billion state budget.

“A budget is not really out of proportion when we have the income to support it,” Truenow said.

previousFacebook suspends Donald Trump for 2 years, then will reassess