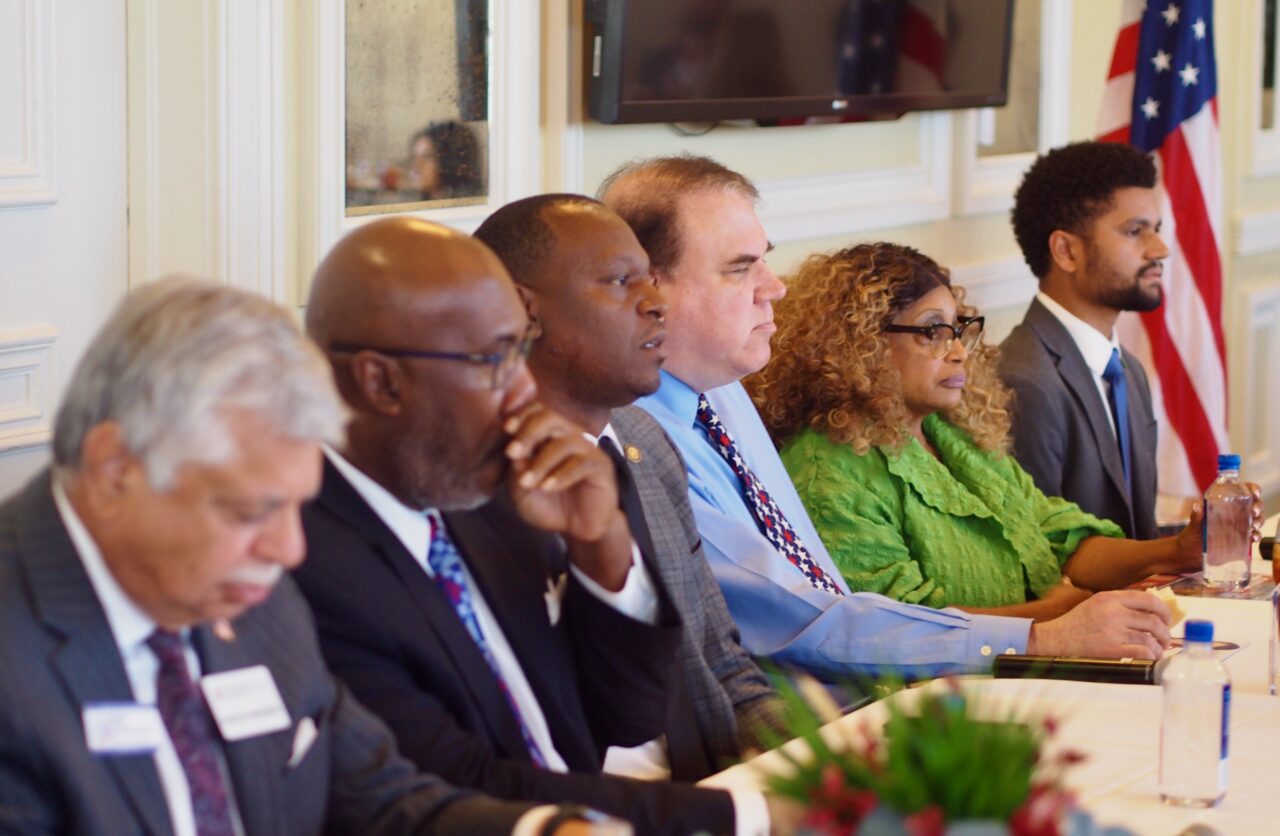 Alan Grayson, Terence Gray and Corrine Brown appears to be having fun.

On the surface it looked as if some were having fun.

But that was only among candidates who arguably are in the second-tier of election prospects, in what is a crowded and dynamic contest for the likely Democratic stronghold representing much of northern Orange County.

And some of it came at the expense of the presumed front-runners.

During a CD 10 Democrats’ debate held by the Tiger Bay Club of Central Florida, state Sen. Randolph Bracy, the clear leader in the only poll publicly released thus far, and Gen-Z organizer Maxwell Alejandro Frost, the clear leader in campaign money and endorsements, took shots at each other. At times, they played offense; at times, defense.

There was a shared eye-roll between Grayson and Brown, and a shared high-five between Gray and Grayson. Grayson and Brown drew laughs engaging in name-dropping one-upmanship. At one point, their frequent compliments and deferrals toward each other led moderator Greg Fox of WESH 2 news to interject, “Is this tag-team wrestling?”

The sixth Democrat at the table, businessman Khalid Muneer, was left more or less on his own, joining in neither the attacks nor the fun.

Four other Democrats — Jack Achenbach, financial executive Jeff Boone, civil rights lawyer Natalie Jackson and teacher Teresa Tachon — were left out altogether. They were not invited to the forum, which Tiger Bay sought to limit to a manageable discussion.

There were some differences, particularly in priorities and details, but not much in general direction.

The bigger differences appeared in discussions of which of them could be counted on to actually get anything done in Congress.

Bracy and Frost appeared at times to be trying to prove themselves, or to challenge each other’s worth, before the Tiger Bay audience of judges, lawyers, business executives and civic leaders who’ve been in Orlando’s establishment for decades.

Meanwhile, Grayson, Brown and Gray came across as if they already have proven what they can do, and just needed the crowd to recall who they are. Grayson served three terms in Congress; Brown served 12 terms before being indicted and eventually convicted and jailed for corruption; and Gray is a longtime Orlando preacher and civic leader.

Bracy’s rebuttal: good luck with that.

“Obviously, I’m a voting rights advocate,” Bracy began. However, “You’re focusing on things as a number-one priority that may be unlikely to change. I think it’s important to focus on candidates who have an agenda that can actually get something done, that is practical.”

“What we just saw are the fruits of what the Republican Party is trying to do right now,” Frost shot back at Bracy’s statement. “They’re trying to bring us down so we think it’s not possible to protect voting rights in this country, that it’s not possible to have accountability for when people try to disrupt our democracy. We can’t give in to that. … We can’t just throw up our hands and give up.”

Bracy sought to portray himself as someone with a record of bipartisan successes, during his 10 years in the Legislature.

When he started to suggest that he was the only candidate with such a record, Brown and Grayson turned to each other, shook their heads, rolled their eyes, and chuckled. It was an echo of Grayson’s complaint last month about a Bracy mailer that had made a similar claim.

Bracy said the times — which he called unprecedented — call for someone who has been successful in government.

“And also someone who has been able to fight against this new Republican agenda. Not a lot of people on this stage have had that experience, to be effective in this sort of environment, but also to fight against what we’re seeing today,” Bracy said. “I’ve done that and will continue to do that in Congress.”

Frost sought to portray himself as a fighter who doesn’t back down. He referred to an incident in June that his campaign has turned into a TV commercial, when he confronted Gov. Ron DeSantis, who shouted him down with, “Nobody wants to hear from you!”

“This is what we’re up against. We’re up against a far-right radical agenda and a leadership that wants to tell vulnerable people to their face that nobody wants to hear from them,” Frost said. “That’s what my life has been about. That’s what my work has been about as an organizer: ensuring that they not just hear from us, but that we get things done to protect every single person, no matter who they are.”

Gray portrayed himself as someone who’s spent a career listening and responding to people to address their lives and concerns.

“I’ve been a pastor long enough. Guess what? I know how to listen to people,” Gray said. “One of the biggest issues is we send people out to Washington who try to tell you what you want. I’ll be the person to listen to what you want, and try to bring it to pass.”

Grayson’s strongest point of effectiveness may have come as he name-dropped President Joe Biden. Biden was Vice President when Grayson was a Congressman representing Florida’s 9th Congressional District.

“President Biden said once about me, ‘We owe you one, buddy.’ Sort of sounds like him, right? ‘This is a guy’ — talking about me — ‘who doesn’t back down from a fight and doesn’t back down about what he believes in.’ The reason why he said that was because I have used the power of the office, the power of being a Congressman, effectively, to help almost every single person in this community,” Grayson said.

“President Bill Clinton said,” she began, “When we see Corrine coming, we say, ‘Just give her what she wants.’ That’s not just talk. That’s what happened. Talking is good, but to be able to walk-the-walk and work bipartisan to get things done? I passed 98 House bills on my watch.”

Muneer asked the room whom they would trust with the economy, especially considering the prospect of “stagflation,” the rare combination of recession and inflation that he worked through as a banker in the late 1970s and early 1980s.

“Of all the candidates I am best-placed with my business and economic experience to deal with some of the things that are going to arise,” he said.

nextLast Call for 8.3.22 — A prime-time read of what’s going down in Florida politics