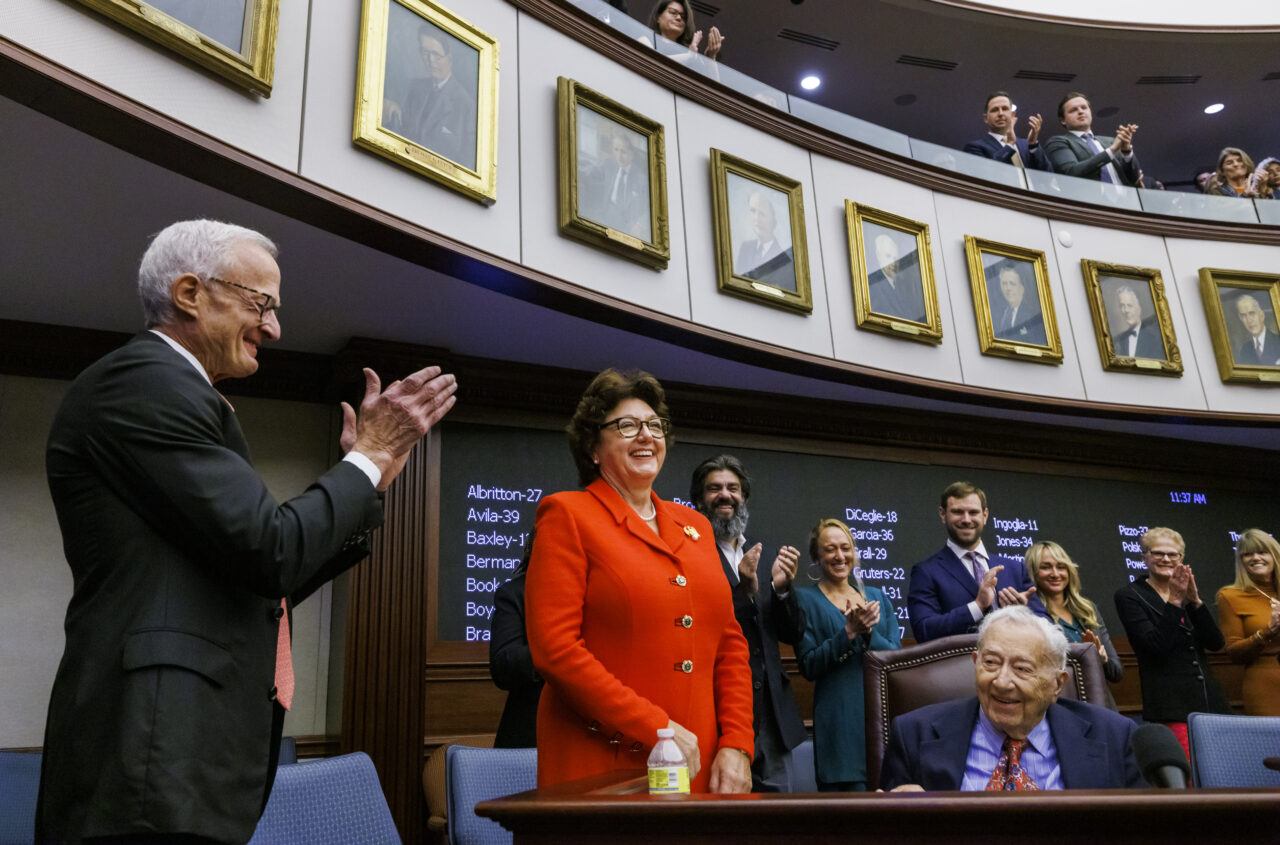 Republican Senate President Kathleen Passidomo of Naples has selected committee Chairs for the next two years, and like her predecessor, she named several Democrats to leadership roles in a show of bipartisanship.

But unlike Wilton Simpson and other Senate Presidents before her, she did not name any Democrats to full Chair positions, giving only Miami Democratic Sen. Jason Pizzo an alternate Chair role on the Joint Legislative Auditing Committee. He’ll have to cede that job to Republican Boca Raton Rep. Mike Caruso after a year.

In a memo to members of the chamber, Passidomo said that she had met with each Senator beforehand and tried to give “great deference” to their areas of interest before deciding whom to give top posts for the 2022-24 legislative term.

Passidomo noted her creation of a Select Committee on Resiliency to focus on addressing the “wide-ranging impacts of Hurricanes Ian and Nicole,” as well as two other committees focusing on pre-K-12 education and postsecondary education.

“As we saw in our travels around the state this summer, the pandemic highlighted issues related to education like never before,” wrote Passidomo, who served as Chair of the Appropriations Subcommittee on Pre-K-12 Education in the past two Legislative Sessions.

“From increasing school choice options to setting standards for curriculum, parents are demanding more involvement in elementary and high school education. Meanwhile, higher education institutions are adapting to the demands of a post-pandemic workforce. I see tremendous room for innovation in this area of public policy and believe the Senate will benefit greatly from separate policy committees.”

Passidomo Monday tapped Republican Sen. Travis Hutson of Palm Coast to serve as Chair of the Committee on Fiscal Policy, which she is resurrecting after six years for the upcoming Legislative Session. Orlando Democratic Sen. Linda Stewart will be Vice Chair.

Passidomo and Hutson competed for the Senate President position. Hutson is now entering his last two years of service before facing term limits, and Passidomo had nothing but praise for her former opponent, whom she called a “go-to Senator for tough issues and leadership priorities,” when she named him Dean of the Senate last month.

“Travis shares my vision for the Committee on Fiscal Policy, and I am confident his diverse policy background and institutional knowledge will be a tremendous benefit to the Senate as he chairs this new committee,” she said.

As previously announced, Panhandle Republican Sen. Doug Broxson will chair the Appropriations Committee, one of the Legislature’s most powerful positions. The committee will work in conjunction with the Fiscal Policy Committee, Passidomo said.

“Sen. Broxson is not content with simply re-adopting the status quo,” she said. “He wants to dig deep and innovate, and that is exactly what we need at this important time in our state.”

Burgess, who is already filing legislation for consideration next year, will also steer the pivotal Ethics and Elections Commission with Rouson beside him.

Taking over for Passidomo as head of the Rules Committee is Republican former Majority Leader Debbie Mayfield of Rockledge. Keith Perry, a Gainesville Republican, will take the seat beside her.

“As a former Rules Chair, I understand the responsibilities of the position and appreciate Sen. Mayfield’s ability to remain thorough, deliberative and decisive, regardless of circumstance,” Passidomo said. “She is committed to a thoughtful and fair application of our procedural guidelines that will allow all Senators to advocate for their positions within the confines of the Rules we agree to follow.”

Miami Republican Sen. Ileana Garcia, who soundly won re-election with nearly 60% of the vote Nov. 8, will continue to command the Children, Families and Elder Affairs Committee.

Former Republican House Speaker Pro Tempore Bryan Ávila of Miami Springs, who coasted into his Senate seat unopposed in June after a brief bid for the Miami-Dade County Commission, will chair the Government Oversight and Accountability Committee and be an alternating Chair for the Joint Select Committee on Collective Bargaining.

Republicans in November won supermajorities in both chambers of the Legislature for the first time in a decade. The party also holds a trifecta in state government, with all three branches under GOP control.

While Republican leaders in the Legislature are under no obligation to give committee Chairs to Democrats, the practice isn’t unusual, particularly in the less partisan Senate. Recent legislative history shows former Senate Presidents Andy Gardiner, Joe Negron, Bill Galvano and Simpson all assigned Democrats to top committee posts at the onset of their presidencies.

But partisan unpleasantness in the chamber has grown more common. Last year, Simpson stripped Senate Democratic President Lauren Book of her position as Chair of the Children, Families and Elder Affairs Committee after Book critiqued plans Simpson and other Republicans had to consider Texas’ so-called “heartbeat bill” banning abortion after around six weeks of pregnancy.

At the time, Simpson explained he replaced Book because of her leadership role, which requires a time commitment.

Passidomo has assigned Book to nine committees, including the one she used to lead, but gave her no Chair or Vice Chair positions.

The full list of committees and committee assignments is available online.

Jacob Ogles and Christine Sexton of Florida Politics contributed to this report. 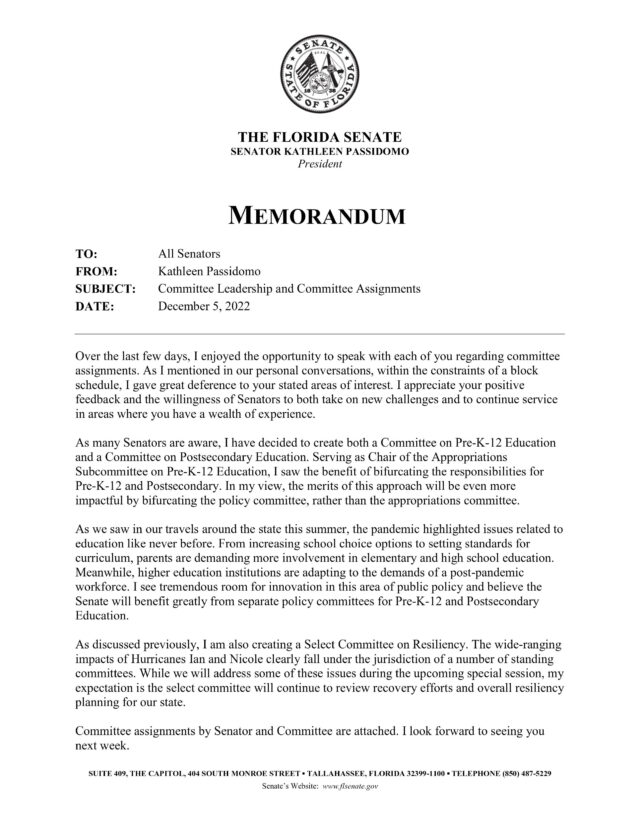 previousJustices spar in latest clash of religion and gay rights