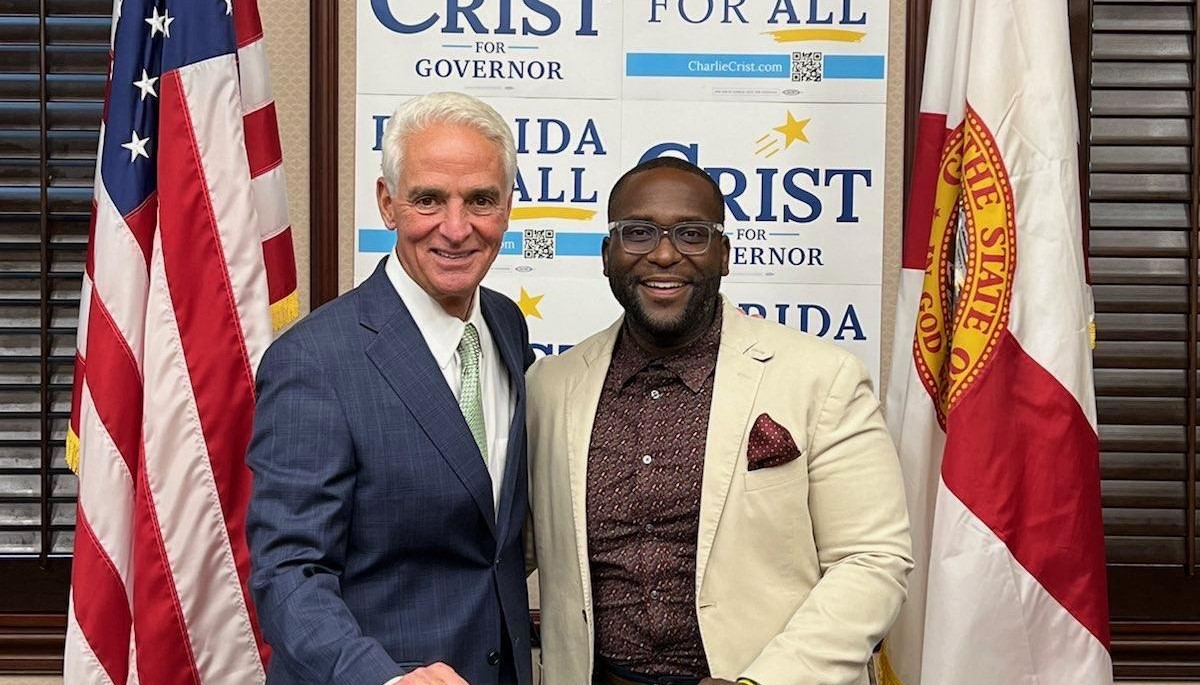 “We in Florida cannot continue going in this dangerous direction, which is not the direction the rest of the country is going,” Jones told Florida Politics.

The events of last week’s Special Session — most notably the Legislature’s party-line approval of a DeSantis congressional map which, among other things, halved the number of Black performing districts in Florida to two — also factored heavily in the decision.

“As someone who represents the largest Black district in the (state), sitting on the sidelines for too long is just not an option,” he said. “And what you see right now is Charlie’s message is resonating in my community of Miami Gardens.

Crist, who began his political career as a Republican and served as Florida Governor from 2007 to 2011, said Jones’ support “means the world” to him.

“This is one of the brightest political young stars in Florida politics today, and having the opportunity to receive his endorsement is humbling,” he said. “I am honored by it, and I’m enormously grateful to Shev and to God.”

Crist then took aim at DeSantis, who has signed legislation including an election law bill that has since been ruled unconstitutional in parts.

“What he’s done this past year relating to voting rights, civil rights, the opportunity for African Americans and people of color to be able to vote — he’s tried to make it more difficult,” he said. “He’s made it harder to utilize mail-in ballots and have drop boxes in minority communities throughout the state of Florida.”

DeSantis’ ratification Friday of the new congressional map, which faces at least one court challenge, is just another step in the wrong direction, he said.

“To basically try to eliminate two Black seats is astonishing, and what the Governor has done with these congressional districts is appalling,” he said. “This is 2022, not 1952. I don’t understand it, and I don’t think Floridians do.”

He added, “It’s one thing after another, and enough is enough. We’re all God’s children. I wish Gov. DeSantis would realize that.”

Jones’ endorsement is the latest in a steady succession of announced support of Crist by hundreds of current and former elected and community leaders throughout the state and nation. Crist has also collected numerous nods from labor unions.

Asked why he chose to back Crist, Jones said it had less to do with aptitude than momentum.

“Commissioner Fried and Sen. Taddeo are both friends of mine. I call both of them ‘sis,’ and I help one and serve with another,” he said. “We have very qualified people who are running, so this is not a qualification test. I want to ensure we have the best advantage to move this state forward.”

Watch a video of the endorsement below.

It's an honor to earn the endorsement of a true fighter for Democratic values, Senator @ShevrinJones!

It’s time to bring back decency and respect to the Sunshine State — and with Shevrin Jones leadership and support, we’re well on our way to making it happen. pic.twitter.com/TYh1397cDR